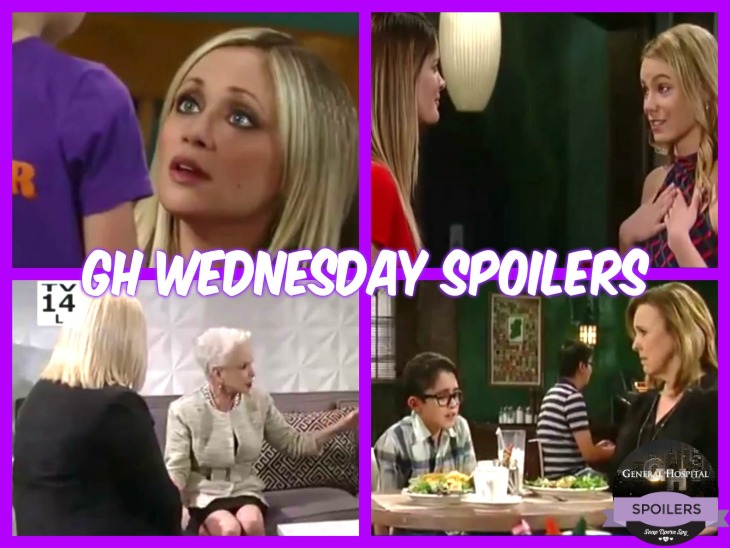 General Hospital (GH) spoilers for Wednesday, June 21st promise a day of anticipation, propositions and a threat that is looming. It seems Charlotte Cassadine (Scarlett Fernandez) has some tough questions for her mother, Lulu (Emme Rylan) pertaining to where her father, Valentin Cassadine (James Patrick Stuart) is at.

In the previews for Wednesday’s episode of General Hospital, Charlotte asks at the PCPD where her father is since she knows he is not a police officer, so it seems she is getting the hint that something is seriously off. Will Lulu tell her the truth about her father’s incarceration?

Then it seems, Amy Driscoll (Risa Dorken) and Nathan West (Ryan Paevey) are close to signing on the book deal. But there is just one catch, they need a picture of Man Landers- if not, the deal will fall through completely. Will Nathan agree to the terms of the book deal or let it fall through the cracks?

Over at Kelly’s, General Hospital spoilers tease that Spencer Cassadine (Nicolas Bechtel) is having breakfast with his grandmother, Laura Spencer (Genie Francis) and her boyfriend, Kevin Collins (Jon Lindstrom) and asks them about what is happening to Windermere now that Valentin has been sent away to prison. How will they respond?

It seems Nelle Benson (Chloe Lanier) has found time to support Nina Cassadine (Michelle Stafford) as she tells her that she feels it is best for Charlotte if she stays with Nina rather than Lulu. Will Nelle offer her support in getting Charlotte back under her roof once again?

It seems Michael Corinthos (Chad Duell) has a tempting offer that he makes to Jason (Billy Miller), he wants Jason to join him at ELQ.  Will Jason take him up on his offer or turn him down flat? With all of Sam’s (Kelly Monaco) premonitions of pending danger with the Morgan family, no doubt a tame job with ELQ would definitely put all her fears to rest- but will Jason agree?

It is unlikely since it is being speculated that Jason will swoop to Sonny’s (Maurice Bernard) island where approaching danger is lurking around every corner. General Hospital spoilers tease that Sonny and Carly (Laura Wright) get the creepy feeling that something is not quite right on the island, will Sonny figure it out before it is too late? Stay tuned!