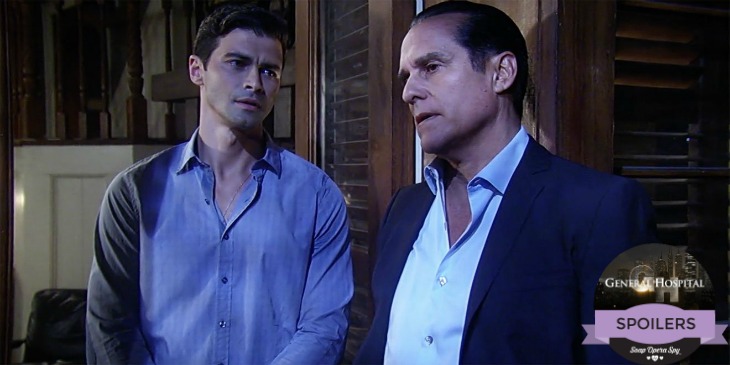 Monday June 19 episode of General Hospital begins with Griffin (Matt Cohen) asking Sonny (Maurice Benard) if he’s planning on killing Ava (Maura West). Sonny feels as long as Ava is in pain he sees it as the universe balancing the scale. Griffin feels no soul is beyond redemption. Sonny tells Griffin he has no idea what it is like to lose a child and asks if he forgives Julian (William deVry) for killing Duke. Griffin doesn’t reply. Sonny feels Ava’s soul can’t be redeemed because she never had one. Griffin leaves. Sonny gets a phone call.

Epiphany (Sonya Eddy) tells Ava it’s too early to give her more pain medicine. Julian walks in. Epiphany leaves to get bandages. Julian sees the DNR order on Ava’s chart. He mentions how she didn’t consider Sonny when she switched the medicine.

Ava regrets what she did and would take it back if she could. She just wants this to be over. Sonny would want her to give up. Julian tells her to fight back and he’ll be by her side. Epiphany returns and Julian leaves.

Julian bumps into Griffin in the hallway. Griffin’s off duty but came in to see how Ava is doing. Julian mentions he’s sorry for what happened to Duke and asks what he spoke with Ava about. Griffin says they prayed together. Julian asks him to keep praying because Ava needs all she can get.

Ava begs Epiphany to see her burns. Epiphany declines saying it’s too soon and she hasn’t had surgery yet. Epiphany finally agrees and hands Ava the hand mirror. Ava sees her face and starts screaming. Julian in the hallway and hears her screams.

Spencer (Nicholas Bechtel) asks Kevin (Jon Lindstrom) what his intentions are with Laura (Genie Francis). Kevin tells Spencer his intentions are honorable. He loves Laura and won’t leave them in a lurch. Spencer asks about marriage. Kevin explains they’re not ready for that leap but when they do it’ll be forever. Spencer considered Kevin’s doing it to solve their housing issue. Laura reassures Spencer she loves Kevin and this will work out. 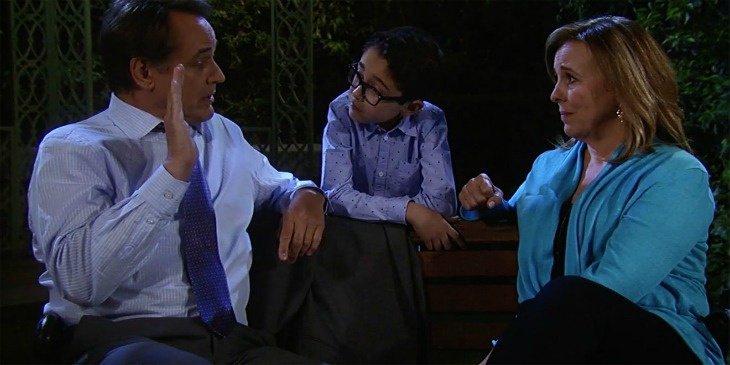 Sam (Kelly Monaco) is upset with Jason (Billy Miller) for endangering himself fighting Costa (Eddie Davenport). As Jason reassures Sam everyone is safe; Sam hears voice saying “he’s not safe – threat still out there”. Sam is concerned the kids will lose their Father. Jason tries to reassure Sam. Later Sam tells Jason she is sorry for over reacting at the hospital and blames it on lack of sleep.

During the night Sam wakes up hearing the voice say “danger everywhere, no one is safe, you have to protect them”. Sam goes to the kitchen and gets a butcher knife. Sam is watching Jason sleep but finally puts the knife down and snuggles up beside him.

Olivia (Lisa LoCicero) finishes her phone call as Ned (Wally Kurth) arrives. Diane can’t be her lawyer due to conflict of interest. Olivia wants to keep Julian from seeing Leo. Olivia tells him about Julian wanting to see Leo and if Sam hadn’t stepped in Alexis (Nancy Lee Grahn) would have offered to defend him.

Ned reminds Olivia she has full custody and to be patient until Julian’s trial is over. Ned mentions their wedding and suggest the first week of July. Olivia wants Leo to have Ned’s name and feel like part of the family. Ned feels symbols don’t make a family but love does.

Nelle (Chloe Lanier) gets a call about a job offer she didn’t even apply for. Someone recommended her for the job.

Carly (Laura Wright) tells Michael (Chad Duell) she’s signing everything back over to Sonny but they’re still divorcing. Carly hugs Michael thanking him for his constant support. Nelle walks in and sees Carly. Nelle hurries out of the room to hide making a loud noise. Carly asks about the noise. Michael lies and blames it on the children. Carly asks if he has feelings for Nelle. Carly warns Michael that Nelle has an agenda and she’ll eventually hurt him.

Sonny calls Carly and needs to see her now. Carly leaves. Nelle walks back in and tells Michael she knows he is the one that arranged for her to get this job at ELQ. Nelle turned the job down because of Carly. Michael says he doesn’t live his life for Carly. He mentions them being a couple but Nelle will only acknowledge thanking him for the kind gesture and leaves.

Sonny tells Carly there is an issue at the casino on the island and she’s the current owner. They have to get there tonight and he’ll fly down with her.