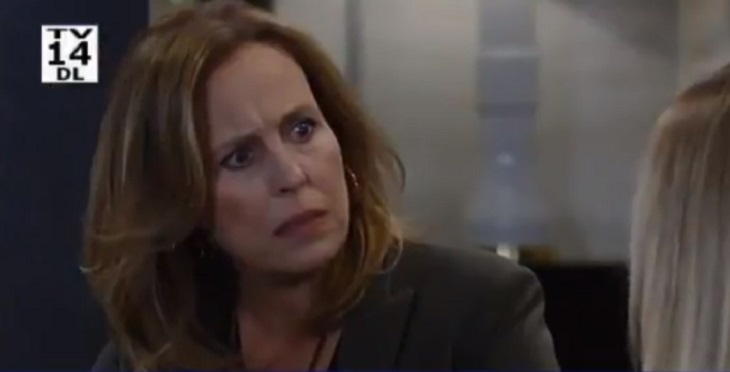 General Hospital spoilers tease that the all new episode airing on Thursday October 19 will be packed full of drama and shocking twists and turns and fans of the GH soap opera won’t want to miss a single second!

Franco [Roger Howarth] recently learned the startling truth about Andrew, according to Betsy she sent him away because he was in serious danger.  Franco obviously is shocked by the news that Andrew could still be alive, and even more shocked that he was the reason he was sent away. General Hospital spoilers tease that Franco is on a mission to find him, and will stop at nothing.  On Thursday’s episode of GH, Franco demands Betsy tell him where she sent Andrew.

According to GH spoilers, Franco isn’t the only one getting a blast from the past on Thursday October 18.  Ava Jerome [Maura West] delivered a not to Sonny Corinthos [Maurice Benard] from Patient 6 [Steve Burton].  Sonny’s interest is certainly piqued.  The General Hospital preview for tomorrow’s episode shows Sonny questioning his baby-mama about the mysterious note.

Meanwhile, Steve Burton continues to search for answers about Jason Morgan.  General Hospital spoilers show that on Thursday Patient 6 will pay Jake a visit, will he lurk in the shadows or actually speak to the troubled young boy?  While Patient 6 is sneaking around the backyard, Jason Morgan [Billy Miller] and Liz Webber have a chat.  It looks like Jason thinks his baby-mama is keeping something from him and he’s a bit suspicious.

Griffin Munro [Matt Cohen] has been struggling with his demons and feelings for Ava Jerome for quite a while.  Dr. Kevin is concerned.  Spoilers tease that on Thursday’s episode of the ABC soap, Kevin will corner Griffin and tell him he doesn’t seem like a “man at peace.”  Can Kevin help Griffin, or is he on a one-way train to the dark side?

Let us know what you think in the comments below and don’t forget to check back with Soap Opera Spy for more GH spoilers right here!