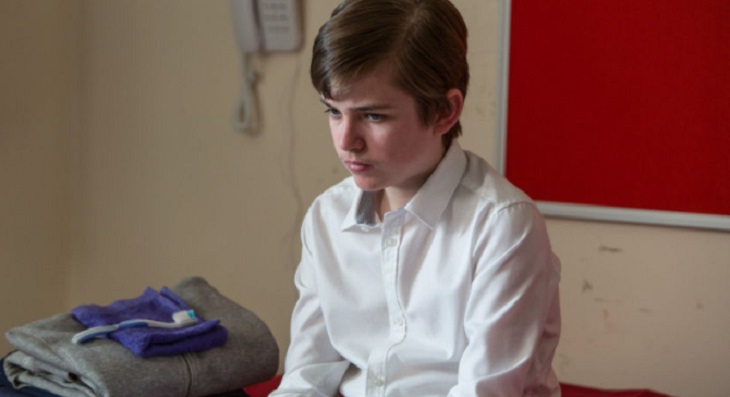 It is once again time for the character Bobby Beale (Eliot Carrington) to return to EastEnders, the young murderer came back onto our screens on Tuesday night. Not a face that many wanted to see.

His father Ian Beale (Adam Woodyatt) sent him away to a boarding school after it was found that it was in fact he that killed his sister Lucy Beale (Hetti Bywater) in a fit of rage. But he didn’t stay there for long, the child was sent to three years in prison for his crime, but will his jail time have changed him as a person? Will he feel any guilt or want redemption?

When Ian went to visit Bobby, and tell him of the death of Steven Beale (Aaron Sidwell) and Jane’s (Laurie Brett) coma, he didn’t seem to care. The cold personality is still there, at his age, it is spine chilling. But why is he back again now?

Related: How Much Do Your Favorite Soap Stars Earn? Corrie And EastEnders Salaries Revealed!

We saw Bobby in some trouble as one of Max’s (Jake Wood) evil colleagues threatened Bobby in prison. Max is using him as leverage over Jane Beale, who he currently threatening to leave Walford. She is the only person who knows the truth behind his evil revenge plot. As it was Jane who he tried to kill in the huge fire weeks ago.

Now that she has arisen from her coma, he is going to use Bobby’s welfare to black mail her into leaving. Jane has gone to extreme lengths to protect her child before but will she leave her husband and leave to stop Bobby from being hurt inside prison?

Will Max use Bobby to get more out of the Beales? If Jane tells Ian any of the threats that Max has been hoarding over her, the situation is likely to get much worse. Max is unstable and scrambling quickly to set his plans into motion. Do you think Bobby deserves this? Or should the Beale’s stand up to Max once and for all?