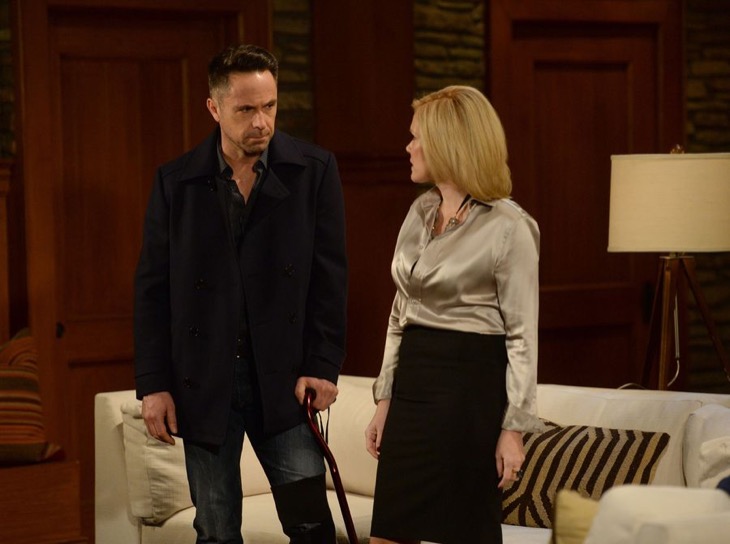 General Hospital (GH) spoilers reveal William deVry could be returning as Julian Jerome fairly soon, even though he has been sentenced to 15 years in prison, fans of the ABC soap opera know no one’s prison time is ever fully served. That being said, viewers are curious to know what will happen to the beloved couple “Julexis” and what would his return to Port Charles mean for Alexis Davis (Nancy Lee Grahn)?

GH sources tease that William deVry has recently revealed to ABC Soaps In Depth, that he doesn’t believe his character, Julian is unredeemable; explaining that he did everything he did to protect his family. Pulling out the dagger and holding it to his wife, Alexis’ throat was graphic and extremely violent but in order to save his family, he had to make it look believable to his deranged and out of control sister, Olivia “Liv” St. John Jerome (Tonja Walker).

General Hospital spoilers realize that some fans firmly believe that Julian crossed the line and there is no way for him to come back from that, while others, after learning why he did it, have compassion for him and what he has done. No one expected to see a weaker and vulnerable side of Julian and although the term “victim” has been thrown around, Julian himself doesn’t think he is one. He grew up in a violent, controlling family. He knows what the mob life is all about and although he hated what it cost him to do what he did, he makes no excuses for his actions and willing accepted the consequences.

Many Port Charles citizens and fans cannot get past the dastardly deeds Julian did in the name of “family”; but honestly, can they say they wouldn’t do the same to save everyone they love? DeVry admits that he is more than willing to face the uphill battle of winning back the heart of the woman he loves; he thoroughly enjoys the prospect of proving to all his haters that he is redeemable and acknowledges how difficult it will be for the writers as well and only time will tell if Julian and Alexis will face these difficult times as a couple or individually.

Related: General Hospital Comings and Goings: A Fan Favorite Is Headed Back To Port Charles

Be sure to tune into ABC’s General Hospital (GH) to catch up on everything happening in and around Port Charles right now. Check Soap Opera Spy often for updates, news, rumors and spoilers!