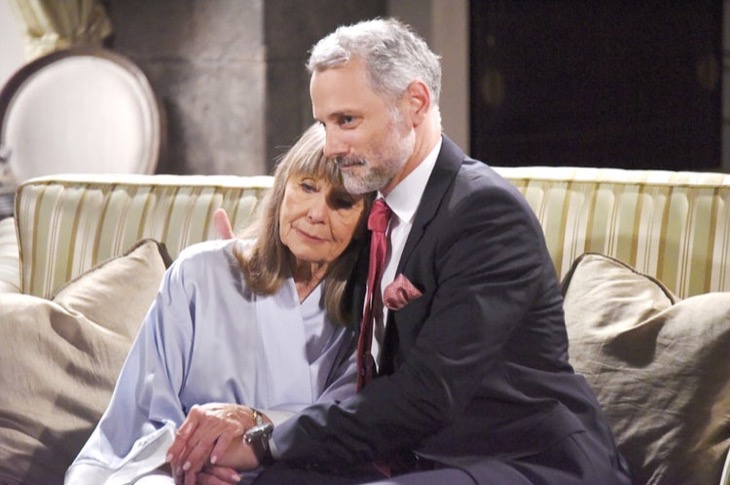 Graham (Max Shippee) has turned out to be far more than a gold-digger on ‘The Young and the Restless’. Viewers recently saw that he orchestrated the clandestine photo shoot at the Abbott cabin which captured Jack (Peter Bergman) and Nikki (Melody Thomas Scott) in various embraces. Victor (Eric Braeden) is set to receive the visual proof, which appears to have been obtained and forwarded by Dina (Marla Adams).

What is Graham’s game? Well, it may involve not only securing Dina’s vast fortune, but also making himself and his suddenly alive mother power players in Genoa City. If, of course, the resident of the senior living facility in Florida is actually his mama.

Y&R didn’t send ‘Jikki’ to the woods on two different occasions in recent weeks to simply forward that revived romance storyline. As with all things soap, there was more than one plot agenda.

Fans were led to believe that Victor was behind the photo grab. It was natural to reach that conclusion, as he appeared to be gathering evidence that could be used against Nikki in a coming divorce battle. But no, Graham was actually the master manipulator.

Jack and Ashley (Eileen Davidson) have openly expressed their desire to remove Graham from their mother’s life, as Mr. Bloodworth knows. His masked response now provides Jack’s personal and professional nemesis with a mother load (wink) of information.

Graham’s obvious intent is to also create a family war between Dina and Jack. The packet of black and white photos Victor receives will appear to come from Madame Mergeron. She’ll have a hard time defending herself to her son whenever it’s revealed that she apparently was the sender.

Related: The Young and the Restless Spoilers: Juliet and Jordan Have Momentum – Lane Lifeless in Autumn

The Abbott siblings can’t be allowed to push Graham out of Dina’s life if his plan to take her loot and other holdings is to succeed. That’s why this former actor has performed an ongoing skit for his mark, pretending to be Dina’s protector.

Ashley has already told her mother that Graham isn’t the orphan he claims to be. So all points noted above and the reaction to unfolding events seems likely to birth a climax from the current arc.

Days of Our Lives Spoilers: If Nicole Leaves Brady, Will He Expose Her as Deimos’ Killer?