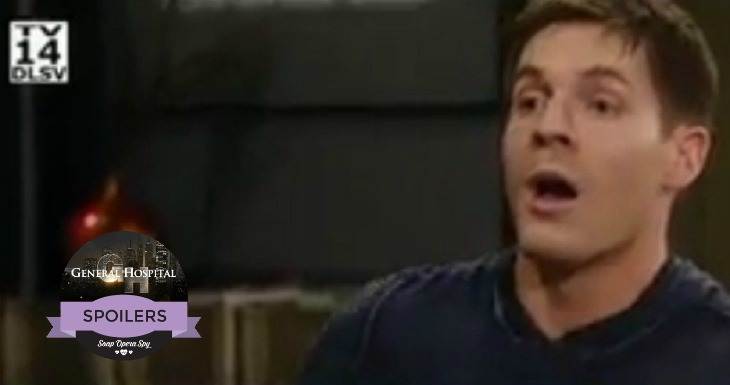 General Hospital (GH) spoilers for Friday, January 13, 2017 reveal Dante (Dominic Zamprogna) and his wife, Lulu Spencer Falconeri (Emme Rylan) running into Valentin Cassadine (James Patrick Stuart) at the Metro Court. Dante informs Valentin they have news about Claudette Beaulieu (Bree Williamson). The Canadian police have confirmed that Claudette is dead, but we later saw Valentin on the phone about it, so is she really dead, or is he playing games with Lulu?

Detective Nathan West (Ryan Paevey) comes to Crimson to see his sister, Nina Clay (Michelle Stafford), telling her he has some news for her. Is he there to tell her Claudette is dead, and how will she react to it? Meanwhile Maxie Jones (Kirsten Storms) is asked for help from Dillon Quartermaine (Robert Palmer Watkins); she tells him he is asking too much from her and she is leaving.

Related: Will Julian Jerome Take Down Franco To Save Alexis?

GH’s Alexis Davis (Nancy Lee Grahn) appears to have finally hit rock bottom and attends her first AA meeting. Sources show her admitting she is an alcoholic and goes on to tell the group that there is something wrong with her. How much will Alexis reveal to this room filled with strangers?

Kiki Jerome (Hayley Erin) goes to General Hospital to visit nurse Elizabeth Webber (Rebecca Herbst). Kiki tells Liz that she is doing everything she can to convince Franco Baldwin (Roger Howarth) to go to the police; both women are completely unaware that Franco had been attacked. Franco wakes up with cuts and blood all over his face and appears to have no idea what happened.

Dr. Hamilton Finn (Michael Easton) has become addicted to the illegal drugs he has been using to subdue the side effects from the fatal disease he had. He has been hiding his addiction from everyone close to him, but spoilers reveal Hayden Barnes (Rebecca Budig) will get very close to catching him when she comes into the room demanding to know what he is doing. Will he be able to hide the evidence before she discovers it?

Be sure to tune into General Hospital (GH) on Friday, January 13, 2017 to catch up on all these stories and so much more. Check Soap Opera Spy often for updates, news, rumors and spoilers!