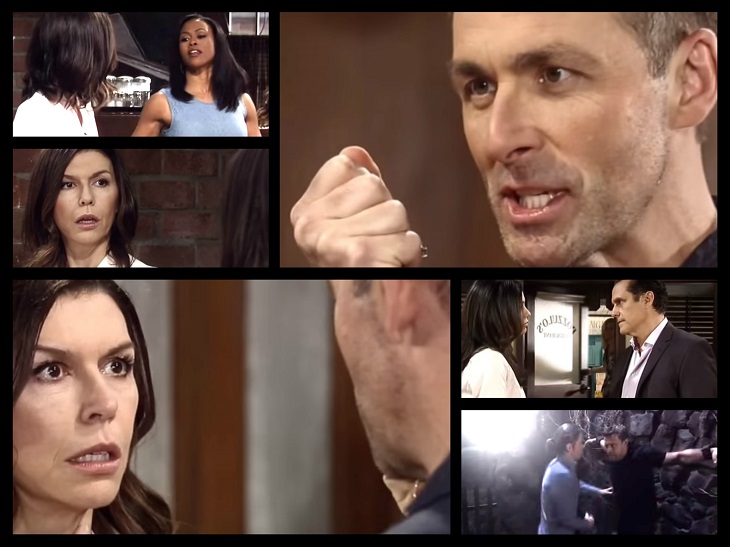 General Hospital spoilers tease that we will have some unexpected events heading our way! Here’s a sneak peek!

The newest ABC General Hospital video promo teases “Flat out, full blast, GH feuds with a vicious twist.” So GH is really heating up and we have some action packed stuff just around the corner.

In the video you see Jason Morgan (Billy Miller) and Franco Baldwin (Roger Howarth) going toe to toe! This is not surprising at all given their past, but the big question here is where are they at during this fight?

Could it be that Franco Baldwin takes a trip to Cassadine Island as well? Spoilers suggest that in an attempt to save Jake (Hudson West) that Franco will make a surprising move.

Then we see a couple of different clips involving Anna Devane (Finola Hughes). First she is seen with Jordan Ashford (Vinessa Antoine).

Jordan asks Anna how long did she think she could hide from her. Well, the thing is, is it really Anna and will she know who Jordan is? She sure didn’t recognize Nathan West (Ryan Peavy!

Then we have Anna and Valentin Cassadine (James Patrick Stuart) in what looks to be Valentin confronting Anna. It seems like he may be starting to figure out what she has been up to, but just how much does he know?

We also have Carly Corinthos (Laura Wright) walking in on her soon to be ex-husband Sonny Corinthos (Maurice Benard) with her divorce attorney Martina (Daya Vaidya) and they seem to be having a deep conversation until Carly interrupts them. She asks them “What is this?” So how will they talk their way out of this one.

Carly was already suspicious the first time she seen them alone talking and now she will most certainly be even more suspicious. Do you think she will put two and two together? Will she figure out that Sonny and Martina have something going on? It’s very possible. Stay tuned to ABC’s General Hospital to find out! Don’t forget to check often with Soap Opera Spy for all your latest General Hospital spoilers, news, updates and much more.

Nashville Season 6 Spoilers: Can The Show Go On Without Connie Britton?

The Bold and the Beautiful Spoilers: Thomas Makes a Confession to Steffy – Spectras Face a Bittersweet Outcome – Liam Suspicious of Bill