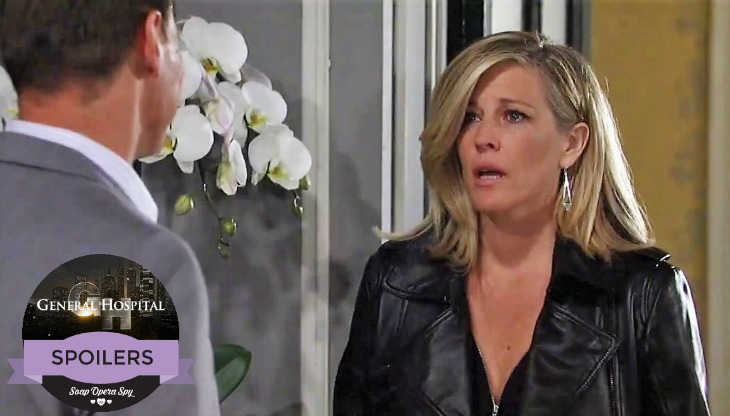 GH’s Anna Devane (Finola Hughes) has been unable to stop herself from investigating Valentin Cassadine (James Patrick Stuart). Once again she will come to see him at Wyndemere, he harshly asks her why is she there.

Scott Baldwin (Kin Shriner) has been caught between Lucy Coe (Lynn Herring) and Ava Jerome (Maura West) for a long time, regarding Ava’s actions with Morgan Corinthos’ (Bryan Craig) bipolar medication. Now, after the robbery at The Floating Rib, those meds are in police custody; General Hospital sources reveal Scott telling Ava there is NO way she will be getting into the evidence room!

After Jasper “Jax” Jacks (Ingo Rademacher) confesses that he is the one who contacted Frank Benson, Carly Corinthos (Laura Wright) is furious and confronts him on why he didn’t tell her what was going on. Will this revelation change Carly’s view and feelings on things?

General Hospital’s Nelle Benson (Chloe Lanier) seems to have affected a lot of people. Spoilers indicate that Josslyn Jacks (Eden McCoy) meets with her brother, Michael Corinthos (Chad Duell) admitting that a part of her still likes Nelle; does Michael feel the same?

Lulu Falconeri (Emme Rylan) is seen visiting her husband, PCPD Detective Dante Falconeri (Dominic Zamprogna) and shares some intriguing news with him. She reveals she has made a new friend, she of course, means Nelle, as she is the new nanny for her daughter, Charlotte (Scarlett Fernandez).

Related: Are Sonny and Carly Better Apart Or Together? VOTE

Will Dante be happy with the development or is Lulu setting herself up for another fail when it comes to fighting for custody of her little girl? Meanwhile, GH mob boss, Sonny Corinthos (Maurice Benard) has a dire warning for Nelle when he runs into her, telling her she should be more careful.

Be sure to tune into ABC’s General Hospital (GH) on Wednesday, April 5, 2017 to catch up on all the excitement happening in Port Charles right now. Check Soap Opera Spy often for updates, news, rumors and spoilers!

General Hospital POLL: Are Sonny and Carly Better Apart Or Together? VOTE