General Hospital POLL: Are Sonny and Carly Better Apart Or Together? VOTE 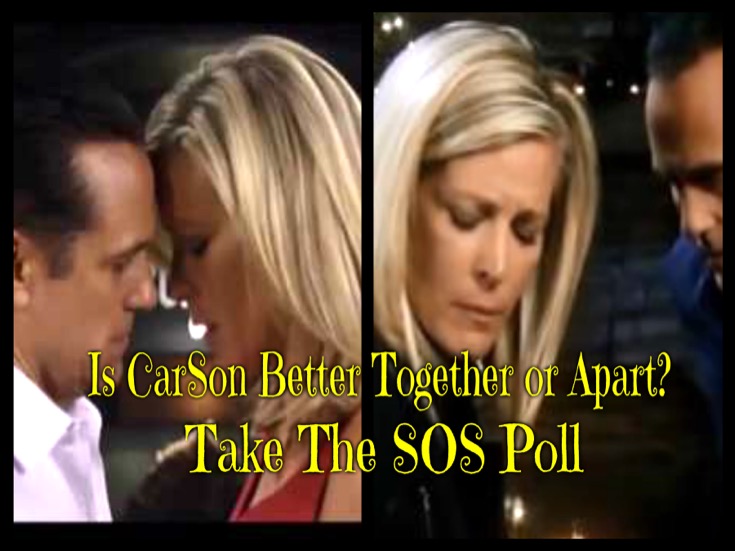 For the past several months fans of Sonny (Maurice Benard) and Carly (Laura Wright) have been left wondering if this is the final chapter of their long and sometimes tortured love story. Should they end this or should they give it one last try? Some fans are hoping for the best and others say they should just call it quits and find someone else to torture. Let’s have a look and you be the judge.

During an argument in early 2001, Sonny turns to Carly (Sarah Joy Brown) and says to her “I lie to you on a daily basis but no more than you lie to me. Why are we here? We’re better at tearing something down than making it last and if we know that about each other what were we thinking trying to make a life together? It doesn’t work”. Soon after this Carly betrays Sonny to the FBI and he puts her out and they are soon divorced. In 2002, they decide to get married again. They have been married a total of 5 times with the last wedding taking place at General Hospital while Sonny was recovering from a gunshot wound. They declared their undying love for one another in front of family and friends while they took their vows.

But it seems this love affair/romance is on again and off again like a light switch as we fast forward to today and Sonny and Carly have separated yet again. Some fans believe this should be their final chapter. They have been back and forth in their relationship so many times it’s enough to make a person dizzy. One would think they would have matured by now. Each time they separate the family is ripped apart a little more and like Michael (Chad Duel) said last week, he was not surprised at the news of their split; and neither are their fans who are left scratching their heads wondering why these two continue to put themselves through this heartache. Perhaps they should let things be and find love in other places. Clearly, they don’t seem to have the kind of love that lasts.

Like Peanut butter and Jelly, pleasure and pain you can’t have one without the other. Dedicated fans wouldn’t have it any other way; Sonny and Carly are soul mates. Even when they are apart, they are together. They fight for each other, with each other and protect one another. Even when they are fighting they still find time to make love. They hurt each other and yet they still come back together in the end. In 2002, it looked like Sonny and Alexis were headed for an affair until Sonny found out Carly’s car had crashed and gone into the lake and she was presumed dead. Sonny realized he was still in love with Carly and when she showed up at her own funeral, the two reunited. In 2004 Sonny had an affair with Sam McCall (Kelly Manaco) and Carly found herself drawn to Lorenzo Alcazar (Ted King). Before the year was out, Carly and Sonny were together again.

Whenever Sonny is with another woman, Carly always finds something wrong with her. In 2007 when Carly agreed to marry Jax (Ingo Rademacher), Sonny was beside himself begging Carly not to go through with the wedding; Could it be jealousy? Each time Sonny has suffered a Bipolar breakdown Carly has been the one to see him through it. In 2006 while Sonny was dating Emily (Natalie Livingston) he suffered a major breakdown and it was Carly who was there to help him through. In 2013, while grieving the loss of Connie Falconeri/Kate Howard (Kelly Sullivan), Sonny stopped taking his medication and it was Carly who convinced him to start taking it again. What is it that draws these two together? Why do they love one minute and hate the next?

Perhaps it’s just the way they love each other. In 2015, while standing by Sonny’s hospital bed begging him to live she told him he was her life partner. During their wedding vows in 2015 Sonny told Carly “I love the family you have given me, I love how strong you are. You show me how powerful love can be, how powerful we are together…you save my life every day and I am blessed every day that you chose me to spend your life with…” How can two people who feel this way about each other want to live apart? Let’s hope love prevails and Sonny and Carly will come back together one last time and stay together. They will never find another soul mate.

Perhaps this break up is needed to let them realize there is life after failed love or maybe they will discover life is better together. Should Sonny and Carly call it quits and stop driving everyone crazy with their on again off again love affair or do you love them together and want them to stop hurting and blaming each other? Please leave your comments and be sure to vote in our SOS poll.

The Young and Restless Spoilers: Chloe Knocks Out Chelsea, She Disappears – Will Kevin Find Chloe and Bring Her Back?