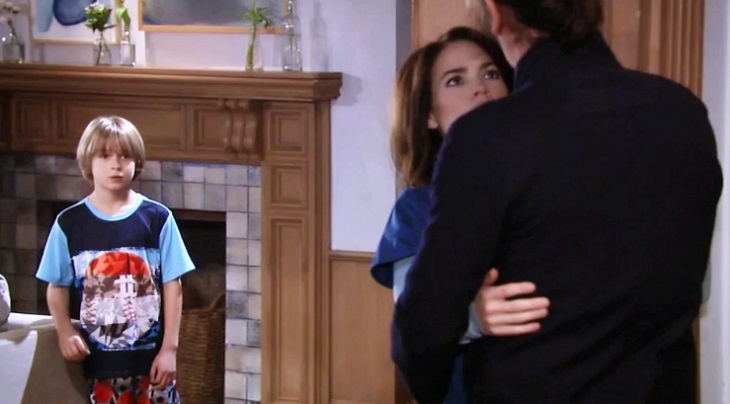 Laura agrees it was a rough day in court but she’s not giving up. Kevin arrives and Lulu wants him to do Charlotte’s evaluation. Kevin explains it’s a conflict of interest and the court wouldn’t allow it. Lulu is desperate to get her custody of her daughter.

Laura suggests to Kevin he find out which therapist is doing the evaluation. Kevin is sorry, he wants to help but he just can’t in this situation. Lulu admits telling Charlotte she was her Mother was a horrible mistake. Lulu fears Charlotte will not say good things about her tomorrow with the therapist. Kevin feels it may work out in Lulu’s favor, finding out why Charlotte feels the way she does toward Lulu.

Lulu realizes she’s been too focused on what Charlotte is going to say. She thanks Kevin for giving her the bigger picture. Lulu leaves to check on Rocco. Laura asks Kevin to be straight with her with his honest opinion. Kevin states the custody hearing could go either way.

Rudge (David Lee) arrives to the footbridge to inform Liv that he lost Alexis (Nancy Lee Grahn) in the woods. Liv isn’t too worried because Alexis is wearing high heels and being in a remote area, Alexis won’t be able to contact police immediately. Liv and Rudge have time to get to the pier to board their boat to Canada. Liv was able to avenge Duke’s death but she has one more task to complete. She wants to “right a wrong” before she leaves. Liv orders Rudge to the pier to secure the boat.

Liz (Rebecca Herbst) and Franco (Roger Howarth) arrive to her home. Liz wants to check on the boys upstairs as they’re sleeping. Franco stops her saying how scared he was thinking she may die because of that bomb. Liz reassures him. Franco kisses Liz but stops and motions to Jake standing in their living room watching them. Jake asks if something happened tonight because the sitter wouldn’t let them watch television. Liz reassures Jake. She shows him a picture of Scout and says this is your new little sister. Jake says “she doesn’t look cursed”.

Jake explains Helena told him the curse would last even after she died. Liz and Franco try to convince him curses aren’t real. Liz says if he remembers anything else from Helena just tell her. Jake stares into air and says “Never forget Jake, Never tell”. Franco asks Jake why he said that. Jake doesn’t remember what he just said. Liz repeats it to him. Jake asks if he can go back to bed. Franco scoops Jake up in his arms and takes him upstairs. Liz walks over the bookcase and gets Jake’s book that Helena gave her one year ago.

Franco arrives back downstairs. Liz tells him she almost threw the book away but decided against it. Liz is flipping through the book as Franco mentions Jake quoted the book. Liz is certain Jake has not seen this book. She’s concerned as to what Helena may have done to Jake. Liz is scared Jake could be holding on to some terrible tragedy that he experienced while with Helena, and is blocking it out. He doesn’t want to keep drilling him for information and she’s not showing him the book. Franco suggests he could do art therapy with Jake, unlock what’s going on in his head, but Jason (Billy Miller) may not like it. Liz says she can handle Jason.

Sonny (Maurice Benard) tells Curtis (Donnell Turner) he needs his help finding Liv Jerome (Tonja Walker). Curtis has no idea she is. Sonny mentions Rudge. Curtis doesn’t know where he is either but bets where you find Rudge, you find Liv. Sonny calls Max and asks about the information about the pier. Sonny is working another angle and will talk soon.

Rudge arrives back to the footbridge to inform Liv he has secured the boat. Liv isn’t there. He’s calling her name and Sonny arrives holding a gun. Sonny asks where Liv is. Rudge doesn’t know. Sonny received a call when Rudge made a deal for the boat to Canada. Rudge explains Liv stated she had a right to wrong and correct her past before they leave Port Charles.

Andre (Anthony Montgomery) tells Jordan (Vinessa Antoine) he arrived to check on a patient and wanted to be sure she is okay after the bomb issue. Jordan thanks him but she’s fine. He doesn’t feel they need to be so formal with each other. He cares about her as a friend only and she can call him anytime she may need something. Jordan touches his hand as she appreciates the gesture. Curtis walks in holding a cup of coffee. Jordan gets a call and excuses herself. Andre thanks Curtis for stopping the bomb from exploding. Curtis informs Andre he and Jordan are not romantically involved. Andre tells Curtis you went after Jordan, now you have her.

Ava (Maura West) leaves Sonny a voicemail asking for a visit with Avery. Knock at door. Jordan asks Ava about Liv. Ava updates her on Liv and Julian being there earlier but doesn’t know where either has gone. She’s concerned Liv will harm Julian. Jordan leaves to try to locate them.

Carly (Laura Wright) is visiting Morgan’s grave site again. She found out who did this to him. It wasn’t Ava; it was her crazy sister Liv. Carly knows what Liv looks like since Ava shown her a picture of her. Liv is the reason Carly lost Morgan forever. She finally understands Sonny after all these years. She wants justice. No, she really wants revenge. Carly acknowledges she sounds just like Sonny. Carly stands up to leave and bumps into Liv. Carly asks Liv what she is doing there. Liv doesn’t realize Carly knows who she is. Liv is holding a plaque and mentions it to Carly, the plaque says Olivia St. John.

Carly calls her a monster. Liv thinks she’s rude. Carly tells her to stop talking! “You killed my son”!  Liv says she’ll leave Carly alone for privacy but Carly steps in front of her and says “you aren’t going anywhere”. Liv pulls a gun on Carly. Carly tries to wrestle the gun out of Liv’s hands. A gun shot is heard. Liv tells Carly she shot her. Carly holding the gun and tells Liv “Okay you crazy bitch. Now we’re gong to talk about how you killed my son’.

Liv stands up and begs Carly to let her go. What happened to Morgan was an accident and she’s sorry it happened and blames Julian. Carly tells Liv she killed her son. It’s not fair she’s breathing God’s air but Morgan is dead. Carly is going to make certain Liv is not alive to hurt anyone else. Liv starts backing away from Carly but the snow on the ground causes Liv to fall. Carly is now standing over Liv holding the gun.

Liv tells Carly you don’t want to do this. Carly says: “I do, I really do”.