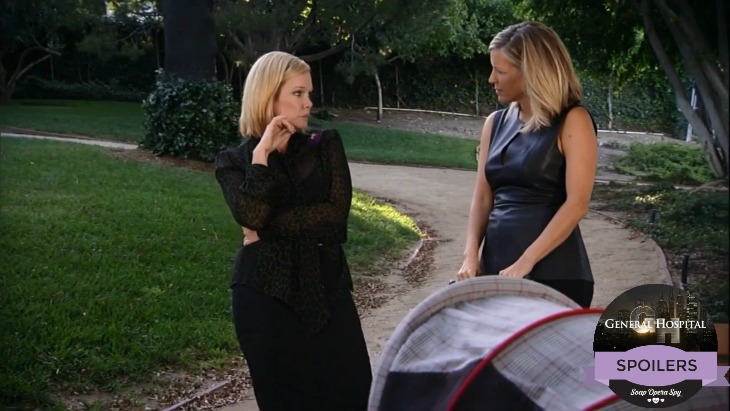 Friday’s May 19 episode of General Hospital begins with Ava (Maura West) and Avery (Ava & Grace Scarola) at the park. Carly (Laura Wright) asks Ava what is she doing with Avery since it’s not her regular day to have her. Ava tells Carly what she does with Avery is none of her business since Sonny (Maurice Benard) is divorcing her.

Carly says the divorce won’t change anything. Ava tells her to take a nice long look at Avery because it’s her last. Ava tells Carly she was just using Avery as a substitute for Morgan. Carly asks Ava what she has on Sonny. Ava says she has to go.

Martina (Daya Vaidya) and Sonny are in bed. Martina mentions being worried that Carly won’t believe her story. Sonny tells Martina not to worry. Sonny cooks dinner for Martina and mentions Morgan was the only one that didn’t like that dish.

Sonny tells her something went very wrong with Morgan but when he climbed in that stolen car but still can’t make any sense with it. Martina tells Sonny she’s available if he needs someone to talk to. Sonny explains how Morgan was bipolar and treatment was going well and then everything fell apart. Sonny asks Martina to stay. They kiss and go upstairs to his bedroom. Carly arrives and sees the wine glasses on the table. She walks to the patio and sees the empty plates. She walks upstairs to Sonny’s bedroom and opens the door to find Sonny and Martina in bed.

Lucy (Lynn Herring) and Liz (Rebecca Herbst) are at the nurse’s ball rehearsal. Lucy tells Liz since Jake (Hudson West) is seeing Dr. Maddox (Anthony Montgomery) maybe he shouldn’t be in the talent show. Jake is looking at the Chimera in his magic kit. Lucy is concerned about Jake’s behavior.

They are interrupted when Dr. Obrecht (Kathleen Gati) arrives saying she came in peace to save the nurses ball. She submitted a tape and Lucy admits the singing was good. Lucy agrees to let Dr. Obrecht audition in the dressing room and mentions to Liz they may have to cut an act to have space. Liz says no way is Jake’s magic act being cut. Lucy finally agrees to let Jake audition. Once Jake has completed his talent Lucy tells Liz he can be in the show. Jake is looking at the Chimera saying “Never forget Jake, never tell”. 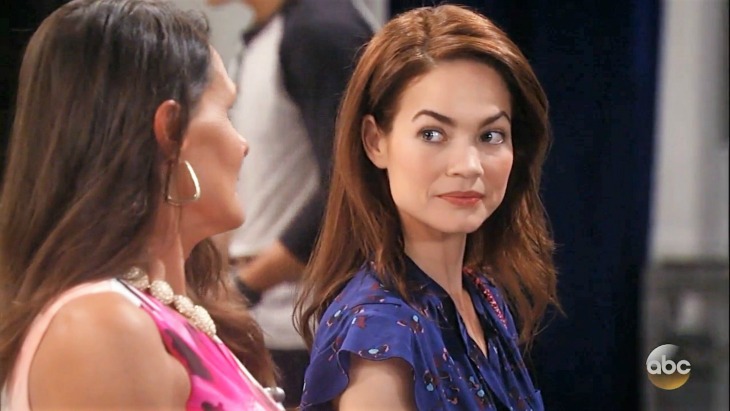 Brad (Parry Shen) tells Finn (Michael Easton) he didn’t provide a urine sample as instructed and heads are going to roll. Griffin (Matt Cohen) tells Brad his head is the only one going to roll. Brad insists Finn is jeopardizing patient lives. Hayden informs Brad the last specimen belonged to her. Brad insists he did not tamper with the testing. Griffin tells Brad to just admit it. Griffin and Finn leave to get another urine specimen. Hayden warns Brad to get an attorney.

Dr. Obrecht exits the elevator at the hospital and tells Brad she has wonderful news. Her talent will be showcased without bribery. Brad tells her about being accused of tampering with Finn’s test. Dr. Obrecht tells him to remain strong and she’s there for him. She leaves to have her costume pressed. Brad walks up to Hayden and Finn telling them how they are the worst, trying to get him fired for something he didn’t’ do. Brad leaves.

Finn mentions how Brad has himself convinced in his own lie. Hayden agrees but wonders if someone else is involved. Dr. Obrecht is in the lab contaminating Finn’s specimen. She says to herself this will finish Finn once and for all.

Robin and Emma arrive to the hospital and tell Griffin about Anna and Alex. Emma tells Griffin she’s going to be Jake’s assistant in his magic show. Anna (Finola Hughes) and Alex (Finola Hughes) are physically fighting in the airport. Nathan (Ryan Paevey) breaks up the fight and asks which one is really Anna. Robin (Kimberly McCullough) and Emma (Brooklyn Rae Silzer) confirm the real Anna to Nathan.

Anna doesn’t know why Alex is there and asks Nathan for a room so they can talk privately. Anna asks Robin to find Griffin and explain he hasn’t been talking to her lately. Robin and Emma leave for the hospital. Anna tells Nathan he can’t be in the room with them due to the information being classified.

Alex tells Anna how she was the one that seduced Valentin that night. She didn’t want him killed so she left the kill orders out in the open. He stole the Chimera Project and left. Anna asks Alex who she is working for. Alex dodges the questions and tells Anna how Valentin sold the Chimera and it’s still out there. Alex explains how dangerous the toxin is. Alex tells Anna she has to get the Chimera from Valentin. Anna says that will be difficult since Alex made Valentin angry at both of them.

WATCH: The Bold and The Beautiful Preview Video Monday, May 22