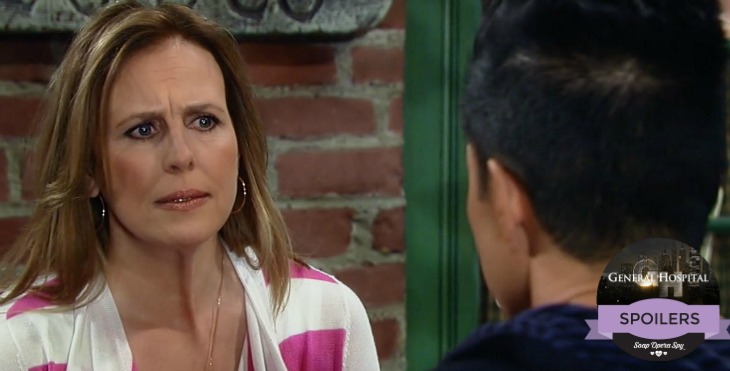 Thursday’s May 18 episode of General Hospital begins with Brad (Parry Shen) hitting the candy machine for this snack to drop. Hayden (Rebecca Budig) and Finn (Michael Easton) are at the nurse’s station. Finn tells Hayden he has to give another urine sample for drug testing. Brad asks them not to discuss bodily functions in the open. Brad complains about the snack and says the hospital is in serious trouble. Brad leaves.

Hayden tells Finn she couldn’t sleep last night thinking about her decision regarding the baby. Hayden did a cost analysis with pros and cons of having the baby did decide she is ready to have a baby. Finn agrees he is too but concerned about his past demons. Hayden reassures him. She tells Finn they should be happy they’re doing this together.

Michael (Chad Duell) at the hospital asks Kiki (Hayley Erin) to check on Nelle’s (Chloe Lanier) status. Kiki checks the computer and says Nelle is on the 10th floor accepting visitors. Michael mentions Nelle doesn’t want to see him. Kiki tells Michael if he cares for Nelle there must be some good in her. Kiki leaves.

Dillon (Robert Palmer Watkins) bumps into Laura (Genie Francis) outside at Kelly’s. Laura mentions she’s filling in Tracy’s position on the Board at the hospital. Brad arrives and interrupts them. Dillon goes inside Kelly’s. Brad tells Laura the hospital has a situation and needs her attention. Brad tells her he has reason to believe Finn is still using drugs. Laura says if/when Finn fails a drug test the hospital board will act accordingly. Brad is angry and leaves.

Brad arrives back to the hospital and listens as Hayden tells the nurse that Finn is ready to give his urine sample. Finn and the nurse leave to get the sample. Brad watches the nurse sit down the sample a few minutes later. Brad picks it up taking it out of the plastic bag. Hayden and Finn walk up and startle Brad. Finn tells Brad it looks like he’s in trouble.

Dillon sits with Kiki inside Kelly’s. He asks her to be his date to the Nurses Ball. Kiki declines fearing she didn’t pass her nursing assistant test and will look like a fool. Kiki gets the test results in a text. She asks Dillon to tell her what it says. She passed the test.

Nina (Michelle Stafford) arrives to the hospital and thanks Michael for calling her. Nina vows never to get Nelle involved in her marriage issues and will make this up to her. Nina asks Michael to go with her to see Nelle. Michael explains Nelle doesn’t want to see him. Nina apologizes to Nelle and her job is still available when she’s able to return. Nelle isn’t certain how soon that will be. Nina says Nelle can count on her and Michael feels the same way. Nina leaves. Nelle struggles to get out of bed.

Michael is standing in the hallway near Nelle’s room. Laura exits the elevator and asks Michael to look over some numbers with her. They leave. Nelle finally opens the door but Michael is already gone.

Lulu (Emme Ryan) tells Dante (Dominic Zamprogna) she’s celebrating their first breakfast as a complete family. Valentin (James Patrick Stuart) arrives to take Charlotte (Scarlett Fernandez) to school. Lulu tells him that Dante will take the children. Miss Watkins the Social Worker arrives. Dante takes the children to school. Valentin tells Miss Watkins he didn’t know about the mix up at school. Valentin explains the Nanny didn’t pick her up and how he wasn’t available to his phone. He gives Miss Watkins the impression he and Lulu worked out the details on their own. Miss Watkins says she’ll be in touch and leaves.

Valentin asks Lulu what kind of game she is playing. He accuses her of putting all of this in motion. She hopes he would reconsider the custody agreement. She would like 2-3 hrs with Charlotte instead of one since his marriage is over. Valentin interrupts and insists his marriage is fine. He tells Lulu to take this up with the judge and leaves. Dante arrives home and Lulu tells him it’s only a matter of time and she’ll have full custody of Charlotte. 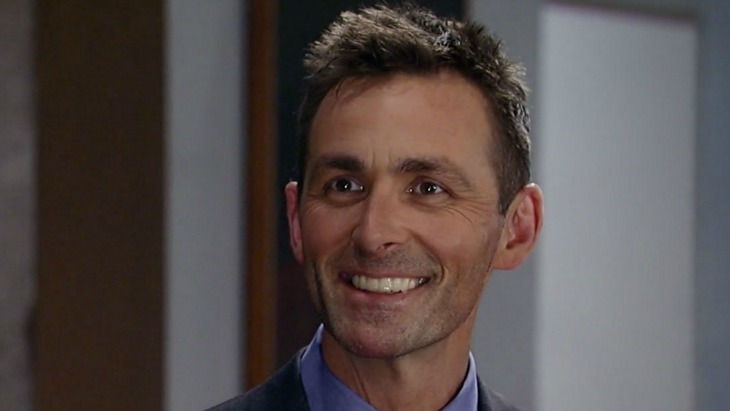 Valentin meets Nina at the Metro Court. He tells her about Lulu calling social services. Nina updates him on Nelle and hopes she is still the nanny. He agrees she is. Nina says this still doesn’t explain where he was yesterday.

Alex (Finola Hughes) wakes up tied to the bottom of her staircase. She manages to untie herself to answer her phone call from the doctor in London. Alex warns him that Valentin is on to them. He says there’s bigger problems because Anna (Finola Hughes) escaped. He says Anna will make her explain everything and get out of Port Charles now. Alex arrives to the airport. Robin (Kimberly McCullough) and Emma (Brooklyn Rae Silzer) exit their plane. They initially think she’s Anna. Emma mentions books that Anna gave her. Alex thought she was meaning a stuffed animal. Alex says she has to go to London for work. Robin notices something isn’t right. Robin asks Emma to text Daddy.

Alex tells Robin the London stuff is classified and has to take care of it right away. She should be back in time for the Nurse’s Ball. Robin tells Emma to hug Grandma Goodbye. Emma refuses saying that’s not Grandma. Alex says of course it’s her and tells Robin to take the keys and make herself home at the Flat. Robin realizes Anna hasn’t used the word flat in years. Robin realizes she’s not Anna. Emma says “Grandma” and sees Anna walking toward them. Anna stares at Alex.