General Hospital episode airing on Friday, February 24 kicks off with Hayden (Rebecca Budig) making a phone call and realizing Dr. Hamilton Finn (Michael Easton) is actually back in town and avoiding her. She knows exactly why. She arrives at Finn’s hotel room as he tries to explain missing her 7 or 8 text messages. She rushes past him searching through all his clothes drawers for Zen Zen. She finds the drug paraphernalia stating “you’re still using it”! Finn tries to down play it and accuses her of blowing this out of proportion. Hayden suggests he take leave of absence for personal reasons from the hospital and go to drug rehab. Finn begs for 30 days to get clean on his own. Hayden says if you don’t go to rehab she knows where this ends for them. He declares his love to her stating she means more to him than any drug. Hayden has to leave the board meeting and tells him don’t expect her to come back. After she leaves his room Finn starts to shoot up and stops.

Dante (Dominic Zamprogna) approaches Valentin (James Patrick Stuart) and Nina (Michelle Stafford) at their table at Metro Court. Valentin is shocked to learn a complaint has been filed against Anna (Finola Hughes) for breaking and entering into his home. Nina proudly confesses it was her and she wants Anna prosecuted. Valentin asks Dante to excuse them for a moment. Dante steps away and Valentin instructs Nina to drop these charges immediately. Nina wants to debate but he shuts her down reminding her they are in a custody battle with Dante. Nina asks if he is in love with Anna. Valentin reassures Nina she is only women he loves. He calls Dante back to the table informing him this is a misunderstanding and they are dropping the charges. Later Valentin stops by Anna’s room to inform her charges are dropped and they can pretend it didn’t happen. But we know it did. 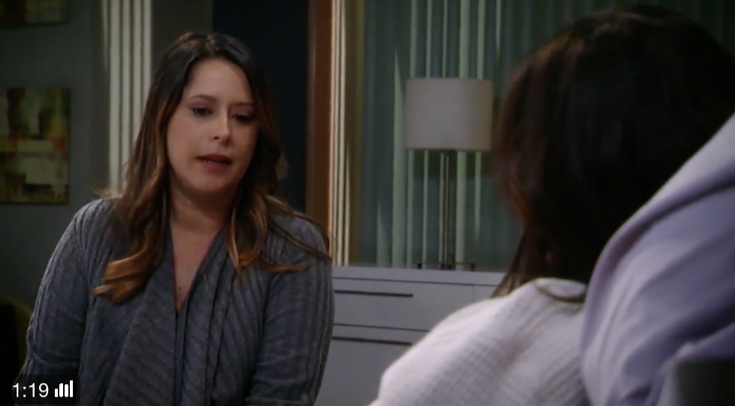 Robin (Kimberly McCullough) checks in on Anna in her hospital room. Anna mentions the visit she must make to the PCPD regarding her B&E at Valentin’s. Robin exits the room to chat with the officer regarding her Mother’s medical situation. As they walk away from the room, Liv St. John Jerome (Tonja Walker) approaches the nurse’s station. She asks about the board meeting today but the nurse has to answer the ringing phone. She overhears him state Anna Devane’s room number. Liv pulls a knife as she starts opening the door to Anna’s room. She hears Robin’s voice in the background and quickly leaves. Robin walks in to find Anna awake and stirring. Anna mentions having a dream that someone was entering her room giving her a jolt of adrenaline. Robin informs Anna she has plenty of reasons to live including a new grandbaby on the way.

Lucy Coe (Lynn Herring) and Tracy (Jane Elliott) are in the board room getting ready for the meeting. Lucy tells her “too little too late” to get GH sold to the Quartermaine Family. Tracy accuses Lucy of no loyalty or honor, only wanting the real estate fee she’ll receive if developers win the bid. Lucy tells Tracy she’s a snob and people do not like her. Laura (Genie Francis) gets a text from Tracy asking if she’s on her way to this meeting. Laura’s vote could be the deciding factor. Laura just finished chatting with Alexis who apologized for being under the influence while giving her legal advice regarding Nicholas’s estate. She was correct but as a 30 day recovering alcoholic she needs to make amends. Laura’s purse is deliberately knocked off her table as Rudge passes by. As Laura is picking up her purse contents, Rudge drugs her coffee. He apologizes and says you didn’t get to drink your coffee. She decides to take a sip of it as the caffeine may be helpful in her meeting at GH.

Alexis is talking with Liv regarding the key Julian gave her to his safety deposit box. Liv scoffs at the idea but tells Alexis to bring her along should she decided to open it. Alexis gets a call from Diane and must take it. While distracted Liv drops Sam’s phone into Alexis purse. Alexis finishes the call but Liv receives one from Rudge. Liv excuses herself and rushes to the parking garage to find Rudge sitting in drivers seat with Laura the unconscious passenger. Liv instructs him to take her for a very long drive.

Jason and Curtis open Liv’s grave to find it empty. Curtis is creeped out, going home for a hot shower and ponders telling PCPD that Liv is alive. Alexis walks up to Jason asking about Sam. Jason asks if Sam mentioned picking Danny up at Monica’s. Alexis tells Jason she hasn’t spoken to Sam since yesterday.

Sam wakes up on the snow covered ground under the foot bridge. She’s relieved to feel Scout moving. She talks to the baby saying she’s going to get them out of this situation. Sam starts crawling half way up the concrete wall of the ravine and slides down to the frozen ground becoming unconscious again. She eventually wakes up moaning in pain saying “Don’t worry Daddy will come to help us” and falls unconscious again.

Monday on “General Hospital” spoiler say we will find Julian chained to a wall frantically asking Liv what she’s done with Sam.

The Young and the Restless POLL: Dylan Is Gone Forever – Whose Fault Is It? VOTE!