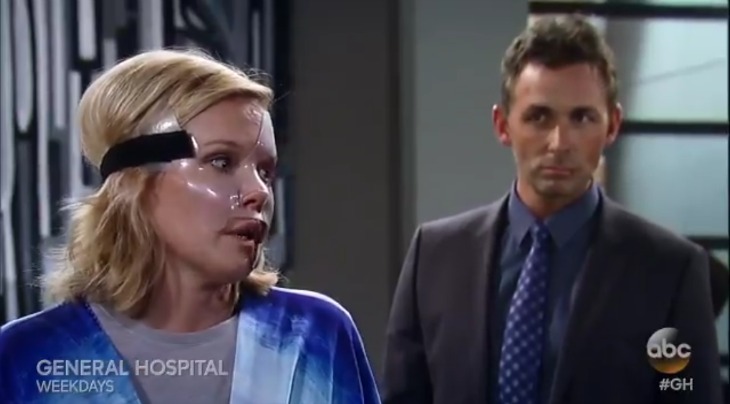 Valentin (James Patrick Stuart) is startled by Spencer sitting at his desk in this living room. Valentin tells Spencer Wyndmere was left to him in the will. Valentin calls Laura and says he has something that belongs to her.

Laura arrives and tells Spencer to go to the launch with Kevin. Laura warns Valentin the civil suit will not go away and Spencer will have the satisfaction of hearing in court how you killed his father. Laura tells Spencer his safety is the most important thing and she knows what she has to do.

Julian (William DeVry) gives Ava (Maura West) the insurance check from the fire. Ava thinking of investing the money and living off the interest so she won’t have to leave her apartment. Julian isn’t giving up on his family and leaves. Ava removes the mask and looks at her face in the mirror.

Valentin arrives and Ava brings up him killing Nicholas. Valentin says they only know Nicolas went flying through a window. Ava tells him to leave but he needs to tie up loose ends. Valentin tells Ava he’s about to make her an offer she can’t refuse.

Carly (Laura Wright) tells Bobbie (Jacklyn Zeman) it’s as if Sonny (Maurice Benard) has fallen of the face of the earth. Carly knows Garvey (Rick Ravanello) didn’t kill Sonny because she can feel it. She leaves to keep searching. 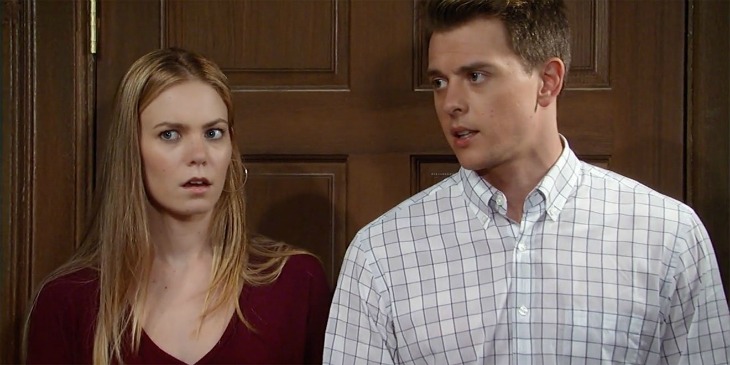 Michael (Chad Duell) tells Joss (Eden McCoy) her necklace is made out of a bullet casing and demands to know where she got it. Joss explains Oscar (Garren Stitt) gave it to her but she’s more concerned Carly will find out she left the house. Michael starts to call the police but Nelle (Chloe Lanier) mentions the bullet was fired recently. Carly is knocking on the door as Joss begs them not to tell on her. Carly tells them PCPD has a clue about an abandoned building. Michael mentions the property where buildings are being demolished. Carly tells Michael to call Dante as she leaves to go to the property.

Jason (Billy Miller) tells Sam (Kelly Monaco) who Garvey is. Alexis (Nancy Lee Grahn) walks up and helps Sam to her room. Alexis tells Sam she saw Sonny in the ER. Alexis explains how the infection causes her to hallucinate. Sam says there is something she can’t remember but Alexis says whatever it is can wait. Alexis leaves to get the nurse to give Sam medicine to help her sleep.

Alexis runs into Julian in the hallway as he’s on his way to see Sam. Alexis tells Julian he can not see Sam and to leave. Alexis leaves to the find the nurse and Julian visits Sam. Sam tells Julian she needs to talk to Sonny. Julian tells her to get back to bed. Sam asks for her phone so she can call Sonny. She remembers Julian saying she has to get rid of Sonny. Julian tells Sam it was a hallucination. Alexis arrives and Sam mumbles it must have been a dream and falls asleep. Alexis asks Julian what Sam was meaning. Julian tells Alexis it was nothing and he is just protecting their daughter.

The guard outside of Garvey’s room gets called away. Jason goes inside and closes the blind. He covers Garvey’s mouth and threatens to kill him. Garvey admits he shot Sonny but he didn’t kill him. Garvey passes out as he starts to tell Jason where to find Sonny.

Sonny is laying on the ground unconscious as the loud speaker announces the demolition of the building begins soon. Sonny wakes up and hears the demolition begins in 15 minutes. Sonny yells for help. Sonny struggles to stand up but passes out. Carly arrives and gets Sonny to wake up. They’re standing when they hear the count down for the demolition to begin. Sonny is unable to walk and tells Carly to leave. Carly puts her arms around his shoulders and tries to help him walk. The countdown of the last few seconds can be heard in the background.

Check back with Soap Opera Spy for more GH spoilers and news.

Greg Rikaart Returns To The Young And The Restless – Confirmed!