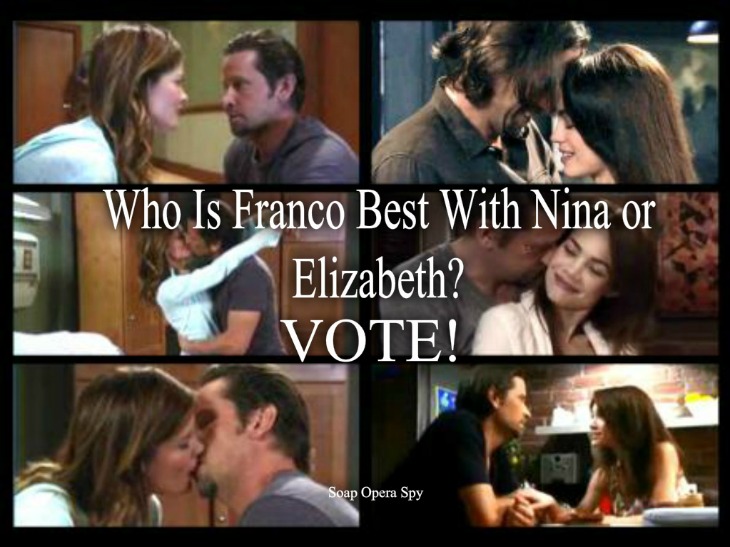 General Hospital (GH) spoilers reveal that although Franco Baldwin (Roger Howarth) hasn’t been on screen lately, he is still deeply involved with General Hospital nurse Elizaebth Webber (Rebecca Herbst) and her three sons. Franco has been with Elizabeth for a while now and although he has done some insane and unforgivable things, he has been nothing but kind and loving towards Liz and her sons, especially young Jake Webber (Hudson West).

GH’s Franco Baldwin has been pretty low-key recently, committing his time to Liz and their small family, but things weren’t always so smooth for him. He placed Liz’ rapist in a cage with a shock collar on him, he assaulted Samantha “Sam” Morgan (Kelly Monaco) and made her believe he raped her, taunting that her unborn baby was his while claiming he was Jason Morgan’s (then-Steve Burton) twin.

Elizabeth Webber may be a lot of things, but she is a good mother who tries to see the best in people. She has forgiven Franco for all the bad things he has done, since most of them were due to his brain tumor, and since she has medical history and knowledge, it is easy for her to accept that as a reason rather than an excuse. Being with Liz has given Franco a sense of family and normalcy; unlike his relationship with Nina Reeves (Michelle Stafford) which fed into his dark side.

General Hospital spoilers tease that although Franco and Nina seemed to be a perfect match, Nina was still very unstable and raw from waking from her coma and struggling with the fact that life didn’t stop when she did. Nina wanted a baby and literally stole a baby, Avery Corinthos (Ava and Grace Scarola) from the womb to claim her has her own; and Franco, who didn’t want to have a child of his own, helped her escape with the baby, promising a life for them both.

He has fought to keep his sanity but he seemed to let his “freak” out a bit more when it came to being with Nina and pleasing her every whim. Fans of the ABC soap opera have been split on who they liked Franco with better. Nina and Liz are both needy women when it comes to their partners; both have been very insecure when it comes to Franco; so we ask, who do you like Franco better with – Liz Webber or Nina Reeves? Please vote and let us know what you think.