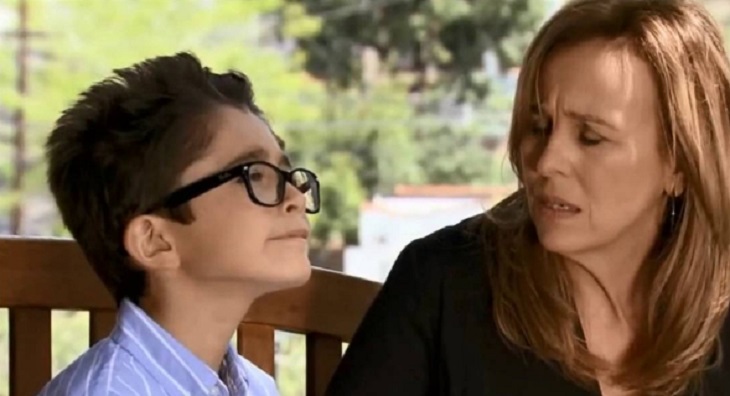 It’s been quite a while since we have seen cute, little Spencer Cassadine (Nicolas Bechtel) on General Hospital, but GH spoilers tease that’s all about to change.

Recently Nicolas Bechtel’s on screen grandmother, Genie Francis, better known for her part as Laura Spencer on GH, sent him a tweet reading, “A little bird told me I might be seeing u soon, well actually a big Bird, a really big bird…”

This is some great news that will we finally be seeing the young Spencer Cassadine back in Port Charles, now only if he would bring his dad Nikolas Cassadine (Tyler Christopher) back with him.

Laura Spencer now has custody of Spencer due to his dad being killed by Valentin Cassadine (James Patrick Stuart). In the soap world no one ever seems to stay dead. Although, Tyler Christopher did share in a tweet to a fan that he will not be returning to GH, but if the writers decide to go down that road they could always get a recast.

Being that Spencer Cassadine was sent off to a boarding school it will probably be that he is only coming home for a visit, but who knows he may end up sticking around for a while. Spring is just around the corner and as we all know schools do have spring breaks, so maybe he will just be home for that. Would you GH viewers like for Spencer Cassadine to be back on the show full time?

Related: Love, Honor, and Cherish: The Greatest Wedding Moments From All My Children,General Hospital, and One Life to Live

When it comes to little kids it is very hard to have them on the show full time being that they do have so much going on in their personal lives, for instance having to go to school. As much as we would like to see the cute little kids on the show all the time it is a bit much for them to endure. It is very exciting that we will be seeing Spencer on GH again soon. Do you fans agree? In the meantime stay tuned to ABC’s General Hospital to see what all the writers have in store for us.