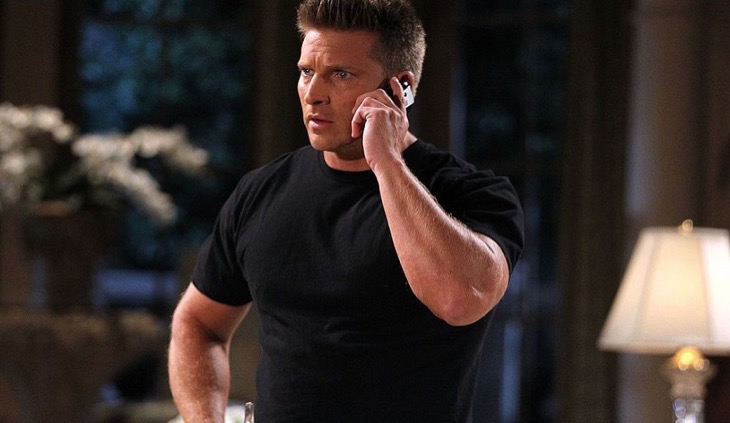 General Hospital (GH) spoilers reveal Steve Burton’s return is going to be epic, and as exciting as GH fans think it will be; but no one is prepared for the tidal wave of drama its going to cause and the residual effects it will leave to all the people who love him. Everyone has just gotten used to the fact that Jason returned from the dead with a new face after being fatally shot and left for dead by Cesar Faison (Anders Hove); how will they cope with the arrival of a man who has Jason’s old face?

Every fan of the ABC soap opera is looking forward to Burton coming back to town, but there is no doubt how much his return will impact the people he knows and loves and we are not just talking about his friendship and brotherhood with Sonny Corinthos (Maurice Benard).

GH nurse Elizabeth Webber (Rebecca Herbst) is currently struggling with the fact that Jason Morgan (Billy Miller) is close to death’s door and she still feels guilty over keeping Jason away from Sam and their son for as long as she did. Liz has been trying to help their son, Jake Webber (Hudson West) come to terms with everything that happened to him when he was living on Cassadine Island with Helena Cassadine (Constance Towers). How is young Jake going to react to seeing a man with the face of the man who was his father before Helena abducted him?

General Hospital spoilers tease that Dr. Monica Quartermaine (Leslie Charleson) will also be severely rattled by the new arrival in Port Charles. Monica has endured so much, including the death of her husband, Alan (Stuart Damon) and the deaths of all 3 of her children, AJ (Sean Kanan), Jason (then-Steve Burton) and sweet Emily (Natalia Livingston). She has developed a great relationship with Jason (Miller); so how will she react to the fact that there are in fact two “Jasons”?

Sam Morgan probably will be the one most affected by the return of the “old” Jason. She thought she lost Jason that tragic night, then he returned with a new face. They rekindled their love, renewed their vows and even had a baby with him; fully believing he is her soul mate and one true love. GH fans know that Sam’s mind is very fragile lately, especially since she is still recovering from the toxoplasmosis. It is entirely possible that she make fully break from this latest revelation and seeing Jason’s old face may put her in a tailspin she may never recover from.

Needless to say, Steve Burton’s return will be epic, but it may not be as joyous as some may think; a lot of confusion, anger, frustration, and anguish will result in the return of OG Jason. How do you feel his return will impact everyone in Port Charles?

Be sure to tune into ABC’s General Hospital (GH) to catch up on everything happening in Port Charles and stay tuned to catch the return of Steve Burton on Tuesday, September 19, 2017. Check Soap Opera Spy often for updates, news, rumors, and spoilers!