Emmerdale Spoilers: Lachlan Returns From Prison – Killer On The Loose, Who Is His Next Victim? 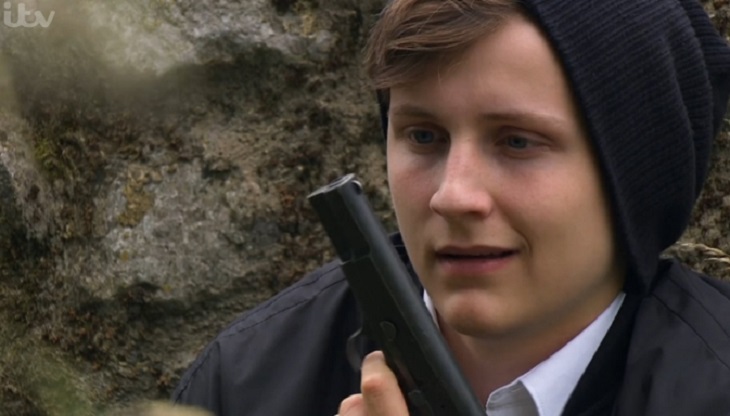 Emmerdale’s Lachlan White (played by Thomas Atkinson) was sent to jail this January after he was accused of attempted murder, against his own grandad. However, the finale of that story line is about to come to fruition as his trial takes place in the upcoming weeks. But the young lad will escape anymore time in jail! Emmerdale spoilers released this week hint that he will walk free from his crimes.

Luckily for the boy, as we have seen photographs of him in court with bruises on his face, not taking too well to prison life? Lachlan has grown up exceedingly wealthy and privileged, he has probably not had the nicest of months amongst hardened criminals.

But what will happen now that he’s back? He is set to become a murderer for real! Photographs of him holding a gun have been seen and the shocking news that he will kill his grandfather for real, as he harbours resentment over the past. Neither he or his mother fought to keep the boy out of prison when family drama revealed Lachlan’s true colours, violence, and lies.

However, those of you wanting immediate action will be sorely disappointed, this will be a story line stretching from March to Christmas! But don’t fret Lawrence will not be the only murder victim in the boy’s path.

It is rumoured that Emma Barton will also be killed by Lachlan, for reasons yet unknown. But many suspect this is no coincidence as the actress Gillian Kearney has expressed wishes to leave the show. Unfortunately for Lawrence’s actor John Bowe, he is reportedly quite upset about being killed off the show.

One thing is for sure though, death is coming back to the dales and in spades. Will his poor mother Chrissie finally be in the clear and who will Lachlan’s first victim be?

This is Us Spoilers: Chrissy Metz Determined To Slim Down Before Season 2?