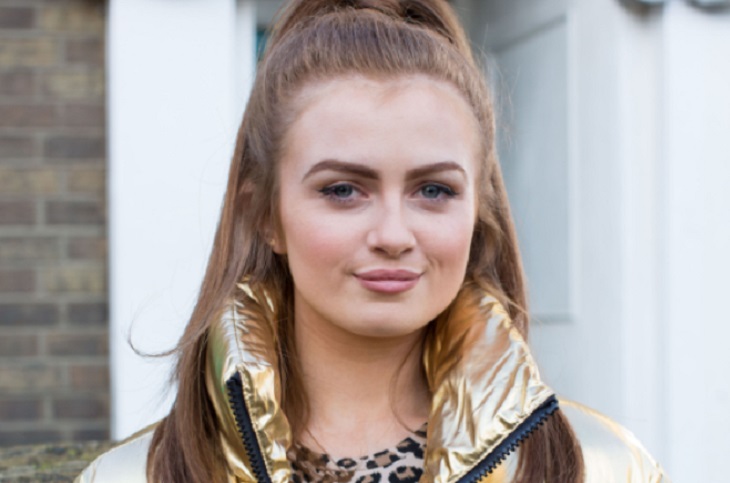 EastEnders spoilers tease that when Tiffany Butcher (Maisie Smith) makes her return to Walford, she may not be alone. Could Whitney Dean’s (Shona McGarty) sister be back in town because she’s pregnant?

When Whitney discovers that her half-sis has come to visit she’s a bit startled; no one invited her! In fact, Whitney herself has just been disinvited from the Carter family home.

What with all the turmoil going on at the Queen Vic pub, Shirley Carter (Linda Henry) informs Whitney that her services (ahem!) are no longer required. Of course the family matriarch isn’t too sad to see the young vixen go, but maybe Mick (Danny Dyer) will be?

Poor Whitney, she was left high and dry when her man Woody (Lee Ryan) left her standing at the train station instead of bringing her along to his new job in Spain.

Related: EastEnders Spoilers: Hot New Romance For Max Branning, And It’s Not Who You Think!

At any rate enterprising Whitney has plans to start up her shirt business again, and determines to make a go of single life.

Yorkshire is calling her, but before she can set the plan in motion, Tiffany shows up to put a wrench into things.

Tiffany really, really, wants to be a Walford resident, and doesn’t like the idea of Whitney relocating. Why? She isn’t saying, but Whitney’s sisterly radar is on high alert.

Especially after Tiffany tries to thwart her move. But then things start to get a bit clearer when Whitney makes a startling discovery about her young sibling.

Revealing pictures from the set show Whitney holding a big old home pregnancy test kit box, something she’s plucked out of the trash can. That wasn’t there yesterday!

Whitney is pretty sure it isn’t Linda’s, so she sets off to confront Tiffany about what she found in the trash.

Will Tiffany come clean to Whitney? If she’s pregnant, is this the reason she’s returned to town, or is there an even bigger bombshell just waiting to explode in the Carter house?