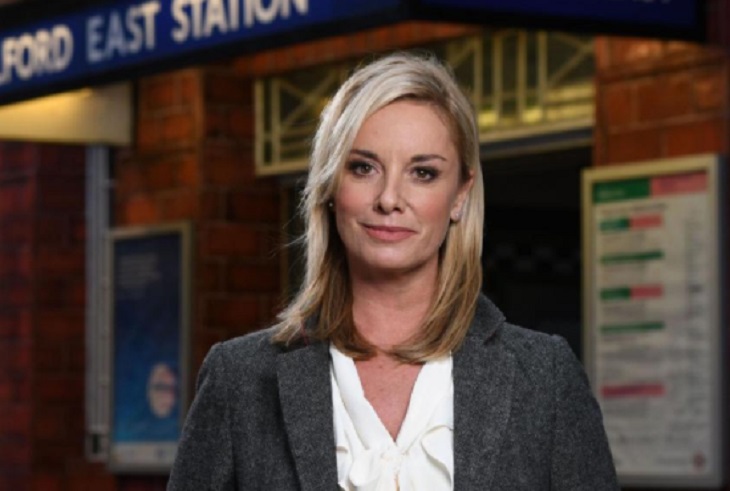 Tamzin Outhwaite left EastEnders almost 16 years ago, but promises fans that her return in January will be well worth the wait. The talented star makes a triumphant return to Walford as Melanie Owen, and she won’t be alone.

EastEnders showrunners describe the hunky teen as a charmer just like his dad, but will he also have daddy’s dark side as well?

That remains to be seen, but one thing’s for certain, Mel herself has taken a turn to the dark side during her time away from Albert Square. In an interview with Digital Spy, the beautiful actress gave a sneak peek into what fans can expect come January.

She promises that the EastEnders return will be an explosive one, although maybe not so much in the beginning. What brings Mel back after all these years? A juicy, soapy, ulterior motive!

Outhwaite used words like brittle, bitter, darker, and damaged to describe Mel’s current state. In addition she and Hunter will be at odds.

“She comes back alone at first,” says Outhwaite, “and then her son Hunter arrives. Young girls and guys are going to be completely swooning over him. He’s gorgeous and brilliant …”

So why did the actress return to her soap roots after all this time away? First off she was approached by executive consultant John Yorke, who developed Mel’s original scintillating storylines.

Yorke asked the actress to return to the BBC One sudser EastEnders and pick up where she left off. Who could resist such a terrific offer?

Nonetheless Outhwaite took a few months to mull over the proposal. Her final decision hinged on her 9-year old daughter’s opinion.

When she told the girl about the show’s offer, her answer was priceless. “I don’t know what it is, but some of my friends at school watch it with their mums. Can you come home every night?”

“I said yes and she said ‘Well do it!” Out of the mouths of babes!

The Young and the Restless (Y&R) 2018 Spoilers: Christian’s Paternity Revealed – Hilary Has Babies On Her Mind & More