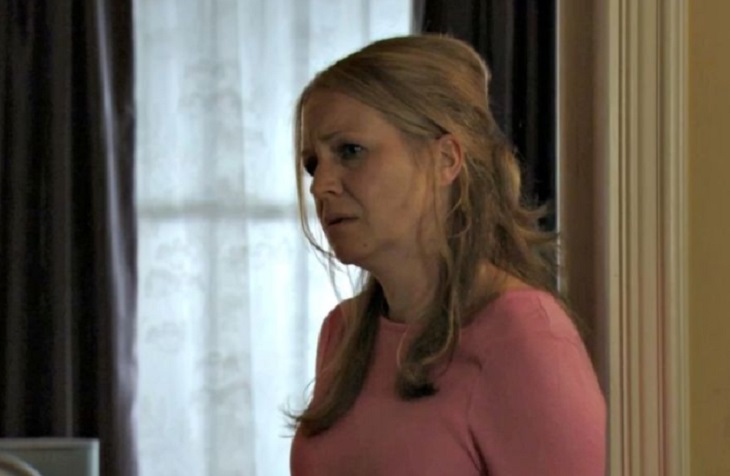 On EastEnders, Linda Carter’s (Kellie Bright) big secret is secret no more. Stunned viewers finally learned what the beautiful bar lady has been keeping from her husband Mick (Danny Dyer) and it’s a bombshell.

All this time poor Linda has struggled alone with a cancer diagnosis that she went to great lengths to hide. Ever since her return to Walford, fans were driven to distraction trying to determine if Linda was hiding an affair, an unplanned pregnancy or something even more sordid.

For months Linda had been off screen caring for her ill mother (while portrayer Kellie Bright was on maternity leave). But after her homecoming it quickly became apparent that she wasn’t being honest with Mick. Nor was he being honest with her, but that’s another story!

Linda’s overdue return should have been cause for celebration. Mick pulled out all the stops, and threw a birthday bash to welcome her home. But when she asked him some hard questions about what had transpired while she was away, the tension was thick.

In a heartfelt talk with Jack Branning this week, Linda opened up and revealed the real reason she was gone for so long. Linda went to Jack’s looking for her son, but she soon found herself spilling all about the state of her marriage.

Realizing that Linda and Mick were on the rocks led Jack to believe that Linda was having an affair while she was away. In the end Linda unburdened herself and admitted that cancer was the real reason for her absence.

So now Jack and bar man Woody (Lee Ryan), plus her mother, know what Linda has been dealing with. Why hasn’t she let Mick in on her secret?

It’s understandable that she might want to keep him out of the loop now given their current estrangement. But why didn’t she tell him before she came back to town? Could her health be in serious jeopardy? Is Linda actually be facing a terminal illness?

The Bold And The Beautiful Spoilers: Lizzie Calls Nicole Mama- Maya Freaks Out