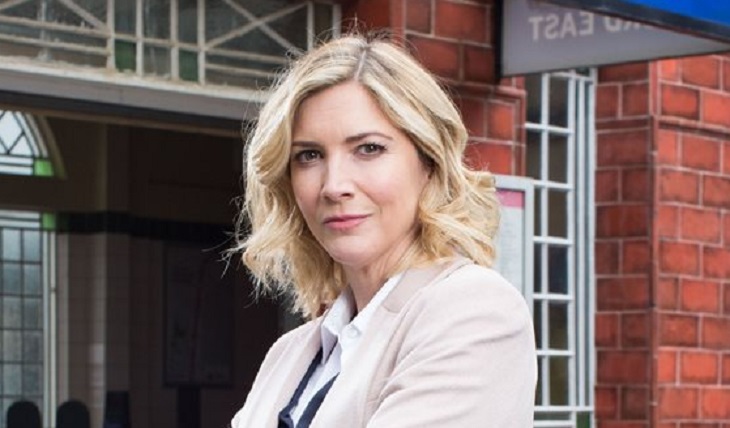 Hot on the heels of signing singing sensation Lee Ryan, “EastEnders,” has just snagged a top name actress to star in the long-running sudser. Megastar Lisa Faulkner is set to join the show in a role that will rock Walford to its core!

The 45-year old multitalented actress will pop into Walford this spring. Her character, Fi Browning, is described as an elegant businesswoman who will nonetheless chase down one of Albert Square’s most desirable residents. Who could it be?

Although Lisa has been sworn to secrecy and refuses to divulge any deets about her upcoming role, the show has thrown some crumbs to loyal fans.

Apparently Fi comes to town with an agenda, and while being a tough cookie, she hides a more vulnerable side.

Gorgeous Lisa began modeling at the tender age of 16, then transitioned into a successful television career.  Her small screen credits include, “Spooks,” “Holby City,” and “Death in Paradise.”

Her career took a new turn in 2010 when she won, “Celebrity MasterChef.” Since then she’s been involved in multiple foodie projects, including co-hosting, “Real Food Family Cook Off.”

In addition, Lisa has written a number of cook books. Her partner is well-known television chef John Torode.

Will Lisa and former Blue singer Lee Ryan interact on screen? He’s set to play Woody, described as a hardcore bad boy. Lee, like Lisa, will also debut this spring; a coincidence?

Although the role is short-term, Lee has been vocal about his excitement in regard to his appearance on the iconic soap.

Viewers will have to wait and see if the two celebrities combine their star power on, “EastEnders.” Can you imagine a scenario in which Lee and Lisa share a storyline?

Let us know what you think about the show’s recent trend of adding well-known celebs to its traditional cast. Are you excited about the high-profile signings, or would you rather have the show focus on more established characters?

The Bold and the Beautiful Spoilers: Shirley Feels Coco Is Spectra’s Only Hope, Sally Puts Plot in Motion – RJ Thrilled by Parents’ News