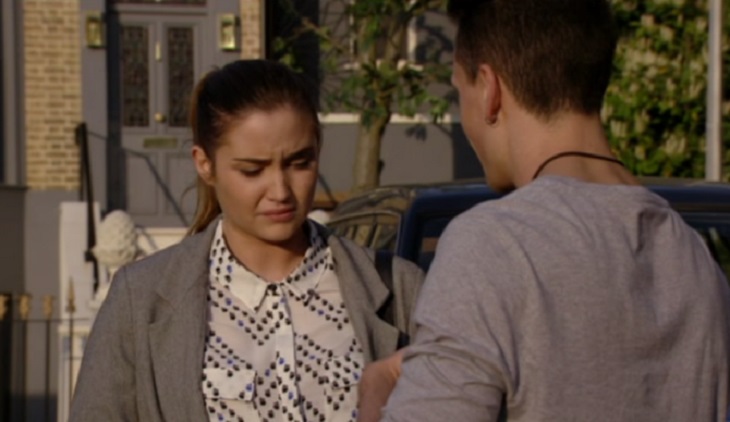 EastEnders spoilers in the Soap’s summer trailer, there was showed a flash of a positive pregnancy test but it’s owner was not yet revealed. Many debated over it being Bex, Whitney or Louise.

But it is becoming clear that it is Lauren Branning that is up the duff. The character has recently been under the weather but could this be morning sickness? She has displayed symptoms of nausea and dizziness. Looks like there’s going to be another baby drama on the Square.

But was this pregnancy wanted? Lauren very clearly told her boyfriend Steven that she did not want to start a family with him at this time in her life. She wants to focus on her career, and her affair. But Steven Beale showed his true colours when before the couple had sex he split the condom.

Is this act of evil the catalyst which lead to her pregnancy? Will he let Lauren know what he did or be so over joyed that he lies to ensure that she keeps the child. Is a child enough to glue their broken relationship back together?

Lauren may not want this child as she is having doubts about Steven, she has been love struck with the dashing Josh and their affair doesn’t seem to be coming to a stop anytime soon. Well that is until she realises she is pregnant. Will she end the romantic flirtation with her boss and return to Steven?

How does all of this tie in with Max? There have been hints that he is planning something big with Lauren. Was it his idea to get her to have an affair, daddy daughter similarities. She met Josh at her Dad’s place of work it doesn’t seem too out of the question for their connection to be a part of his hateful revenge scheme.