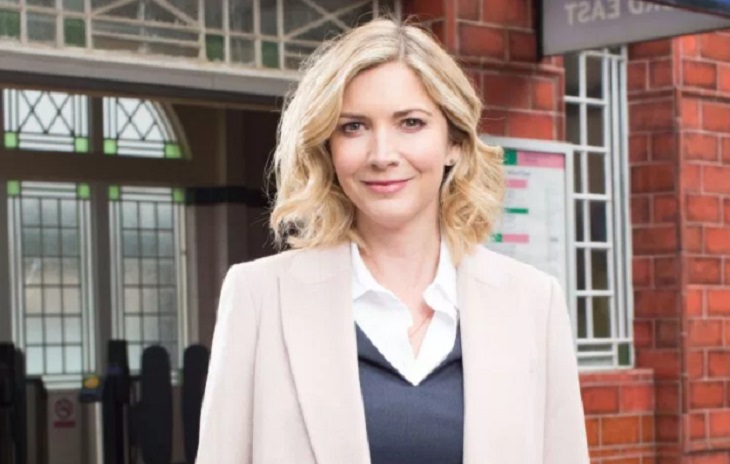 EastEnders fans want to know more than ever, “who’s your daddy?” when it come to the sphinx-like Fi Browning (Lisa Faulkner). All we know about him is that he’s alive and well, despite the lie she told Mick Carter (Danny Dyer).

This week Fi dropped a whopper on Mick, telling the Queen Vic barman that her dad is dead. But as soon as the trusting man left her alone in her palatial digs, the enigmatic lady was on the phone to her dad.

This clear and outright lie puts everything else the scheming Fi has said into doubt. Earlier she confided in Mick that her mom had committed suicide and she was the one to find her.

Mick was understandably sympathetic about the past incident, but was she playing him? We know she’s in on Max Branning’s (Jake Wood) plan to take over the square, but are we now seeing cracks in her steely façade or merely the extension of a well-orchestrated plan?

Gentlemanly Mick had taken Fi back home after she gave a speech at the Queen Vic that didn’t go over so well. Sensitive Mick let her know that it’s understandable for her to be on edge given that this is the anniversary of her mother’s death.

Mick’s inquiring mind then asked about her other family members, and she said that her father is dead, also.

Related: Fans Blown Away By Shock Death And Exit In Walford

But before he could probe any further, Mick was called away to an emergency involving his son and wife Linda (Kellie Bright). Given that Johnny (Ted Reilly) has been shot and subsequently involved in a horrific ambulance crash, will Mick forget all about looking further into Fi and her mysterious past?

Well, fans sure won’t! Now that juicy bits and pieces of her past are slowly being exposed, speculation on just who she really is has ramped up.

Is she Josh’s (Eddie Eyre) sister or lover? Is Max’s boss her dad? Stay tuned fans, the truth is about to get stranger than any fiction you can imagine!

Days of Our Lives Spoilers: Will Horton Not the Only Dead Character Returning