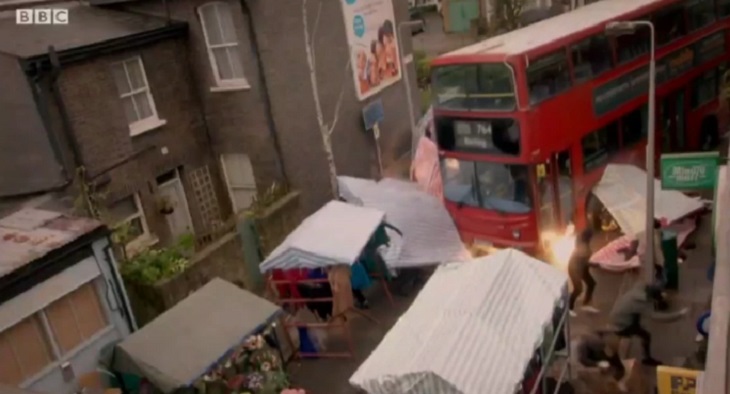 When EastEnders spoilers revealed that there would be a disaster this week in Walford, the rumor mill went in to overdrive.  Despite leaked photos of the bus crash in Albert Square, some rumors were indicating that the “disaster” was actually a terrorist attack.

After what happened recently in Berlin in December, when a truck was driven through a market, it’s not surprising that somewhere along the line the rumors evolved in to a terror attack in Walford.

Related: Who Will Die During Disaster Week – Nearly A Dozen Characters Involved In Bus Crash

For those of you who watched the tragic bus crash, we are certain now that the bus driver had a medical issue [most likely a heart attack] and that is the reason the bus flew through the square.

A source at EastEnders insisted to Digital Spy that despite the rumors and fan upset on social media, the bus crash on this week’s episode of the soap opera was absolutely not based on any real-life tragedies or terrorist attacks.

Digital Spy’s source added, “EastEnders is a fictional drama and the crash in tonight’s episode was not based on any real-life event. We are always mindful of the content within our episodes.”

Related: Watch Sneak Peek Video “The Calm Before The Storm”

Regardless, some fans think that the crash was “too soon” after similar incidents that have occurred in Nice, Berlin, and Glasgow.

What do you think EastEnders fans?  Share your thoughts in the comments below and don’t forget to check Soap Opera Spy for more EastEnders spoilers and news.