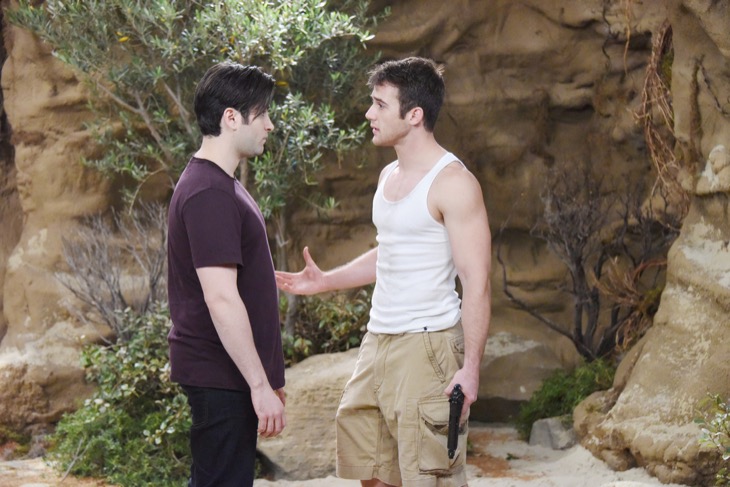 “Days of Our Lives” spoilers for the week of June 5-9 tease that some shockers are in store. The island dwellers will certainly face some scary moments. Paul (Christopher Sean) will contract a mysterious illness thanks to his mosquito bite. He’ll soon experience violent desires and he won’t be able to control them.

DOOL spoilers state that the group will grow fearful when Eli (Lamon Archey) vanishes. Once he finally returns, he’ll fill everyone in on his horrifying ordeal. Eli will declare that Paul came after him and it led to a fierce altercation.

Since Paul has a knife, Eli will note that it wasn’t exactly a fair fight. He’ll show off the wound on his arm and insist that Paul has gone crazy. “Days of Our Lives” spoilers say Eli will make a startling suggestion. He’ll tell Sonny (Freddie Smith) and the others that this threat needs to be eliminated.

Eli will argue that they’ll all die if they don’t kill Paul first. Naturally, Sonny will defend Paul and contend that there must be another way to secure their safety. He already lost Will and he can’t bear to lose Paul, too. However, it’s clear that Paul will be off his rocker for a while. Sonny will have his work cut out for him if he wants to keep Paul alive.

Back in Salem, “Days” spoilers say several Salemites will receive terrible news. Rafe (Galen Gering) will give John (Drake Hogestyn) a distressing call. He’ll let him know that Sonny’s plane fell off the radar. John was thrilled by Brady’s (Eric Martsolf) miraculous recovery, but now he’ll have to fret about Paul. Marlena (Deidre Hall) will try to support John during this difficult time.

Justin (Wally Kurth) will do the same for Adrienne (Judi Evans). They’ll both be nervous wrecks as they ponder Sonny’s fate. Abe (James Reynolds) and Valerie (Vanessa Williams) will also be worried. Since Lani (Sal Stowers) and Eli were on that plane, there’s a lot on the line for them.

“Days of Our Lives” spoilers reveal that Jennifer (Melissa Reeves) and Abigail (Marci Miller) will get updates from Dario (Jordi Vilasuso). They’ll all be concerned about JJ (Casey Moss), Chad (Billy Flynn) and Gabi (Camila Banus). It seems it’s just a waiting game at this point.

Some awesome drama is coming up on the NBC soap. We’ll keep you posted as other “Days” details and rumors emerge. Stay tuned to DOOL and don’t forget to check Soap Opera Spy often for the latest “Days of Our Lives” spoilers, rumors, updates and news.

The Young and the Restless Spoilers: Devon and Hilary Not Done – Embers Still Burn