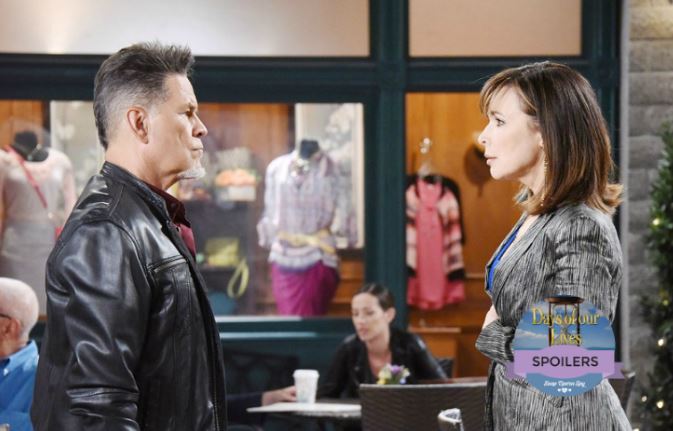 “Days of Our Lives” spoilers for Monday, April 10, reveal that Tripp (Lucas Adams) will rip into Steve (Stephen Nichols) again. He’ll decide to give Kayla (Mary Beth Evans) a piece of his mind as well. Tripp thinks Steve is downright despicable for cutting Ava’s (Tamara Braun) life short. He can’t believe that Kayla is trying to defend Steve’s actions.

Tripp talked everything over with Angelo (Angelo Tiffe) to gain a little clarity. He now feels like he sees the big picture, but that’s not really the case. There’s much more to this “Days” story. Angelo downplayed Ava’s transgressions, but DOOL viewers know she was pretty horrible. Ava is definitely the villain in all of this.

Tripp just doesn’t want to admit that his mother could be so wicked. However, there’s another layer to this plot and it’s extremely important. Tripp has been fed a crucial lie. “Days of Our Lives” fans will recall that Joey (James Lastovic) is actually the one who smothered Ava in her hospital room.

Joey has already been struggling with guilt, but it’s only going to get worse. He won’t like the fact that Steve and Kayla are taking flak for his mistake. “Days” spoilers reveal that Joey will decide that he needs to admit the truth to Tripp. Of course, something will likely get in the way. This secret probably isn’t coming out just yet.

Meanwhile, Rafe (Galen Gering) will be forced to arrest Eduardo (A Martinez). “Days of Our Lives” spoilers indicate that Eduardo will get caught trying to steal U.S. Treasury bonds. He’ll hate to see the look of disappointment in his kids’ eyes. Rafe, Dario (Jordi Vilasuso) and Gabi (Camila Banus) are all going to be crushed.

Related: Days of Our Lives: A Complete History of the Long-Running Soap Opera

Dario will determine that Deimos (Vincent Irizarry) needs to pay for setting up Eduardo. He’ll put a revenge plot in motion, but it could have dire consequences. Elsewhere, Kate (Lauren Koslow) will learn the reason for Eduardo’s delay. She’ll spend some heartfelt moments with Eddie as they let go of what might’ve been.

It sounds like an intense episode is coming up. DOOL watchers won’t want to miss the action ahead. We’ll give you updates as other news and rumors emerge. Stay tuned and don’t forget to check Soap Opera Spy often for the latest “Days of Our Lives” spoilers, rumors, updates and news right here.