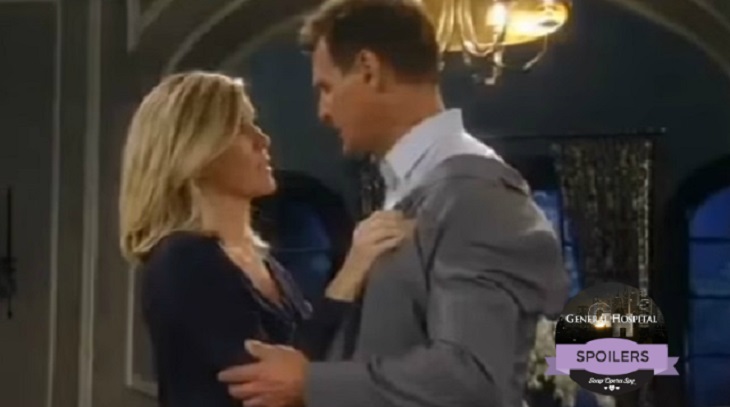 General Hospital (GH) spoilers for Monday, April 10, 2017 brings shocking news to some citizens of Port Charles, questions loom in the air between couples and enemies.  As a duo splits, comfort is found for one of them.  Be sure to catch Monday’s episode!

General Hospital’s Elizabeth Webber (Rebecca Herbst) meets with Jason (Billy Miller) and Sam Morgan (Kelly Monaco).  Liz has decided to stand firm on her decision and confronts them, asking Jason if Franco Baldwin (Roger Howarth) isn’t allowed to be part of the equation, then why is Sam.  How do you think Sam and Jason are going to respond to her?

A Young Jake Webber (Hudson West) comes to visit Franco at his studio, and wants to know why Franco doesn’t want to be his friend anymore.  Will Franco be able to explain what is happening, or will he fight to remain in Jake’s life?

General Hospital’s PCPD Detective Nathan West (Ryan Paevey) has already questioned Sam; now he is visiting Alexis Davis (Nancy Lee Grahn) interrogating her about her ex-husband, Julian Jerome (William deVry).  Sources reveal him asking her if she has any reason to believe that Julian is still alive.

Kristina Corinthos (Lexi Ainsworth) is shocked when her brother, Michael (Chad Duell) reveals to her that their dad, Sonny Corinthos (Maurice Benard) had an affair.

GH spoilers show Nelle Benson (Chloe Lanier) at the Corinthos mansion, talking to Sonny.  Sonny tells her if she is looking for absolution she came to the wrong place.  Will she finally tell him the truth about their supposed night together?

Carly Corinthos (Laura Wright) is at odds with her husband, Sonny over his lies but seems to have forgiven Jasper “Jax” Jacks (Ingo Rademacher) for his part in everything that happened regarding Nelle.  They share an intense kiss, but when Jax tells her he is sorry, she responds by saying she doesn’t want to stop.  Will Carly cross the point of no return when it comes to her marriage with Sonny?

Be sure to tune into ABC’s General Hospital (GH) on Monday, April 10, 2017 to catch up on these stories and more.  Check Soap Opera Spy often for GH updates, news, rumors and spoilers right here.