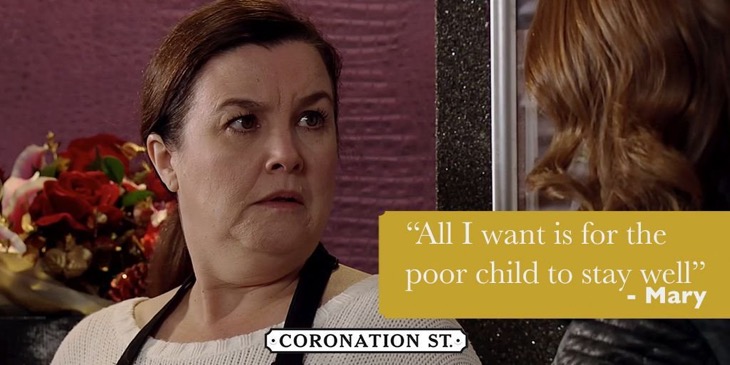 Coronation Street spoilers indicate that Mary might finally be able to prove that she’s innocent, only to see her grandson George fall ill once again, but this time while not in her care. Up until this point, both Jude and Angie were convinced that Mary was to blame for George’s recent and never-ending health issues.

At one point Jude and Angie were so convinced that Mary was to blame for all of George’s health woes that they were ready to pack up their bags and move back to South Africa. They even blocked her from having contact with George and even got the police involved. But this time around it doesn’t look like Mary is to blame for her grandson’s problems. That’s because George falls ill yet again, but this time while in the care of Bethany Platt. After Bethany comes back home from a walk with George, she panics when she sees the little tot shaking. The ambulance is called with both Jude and Angie rushing to be by their son’s side.

Baby George is rushed to hospital. Will he be okay? And will Mary be proved to be innocent? #Corrie pic.twitter.com/B2QsSnHrI8

Now that Mary is nowhere near George during this latest health scare, does this mean that she’s in the clear? Will Jude and Angie believe her when she says that she’s not to blame for George’s health problems? Not so fast as the Appletons still want to get to the bottom of what is going on with their son. But that’s not before things take a turn for the worst, leaving Mary worried about the future as well.

Coronation Street airs weekdays on the ITV network in Britain and is available on Britbox in the United States. Drop us a line with your thoughts in our comments section below. Also, don’t forget to check back with Soap Opera Spy for all the latest news, updates and spoilers on Coronation Street and all of your favorite primetime British soaps right here!