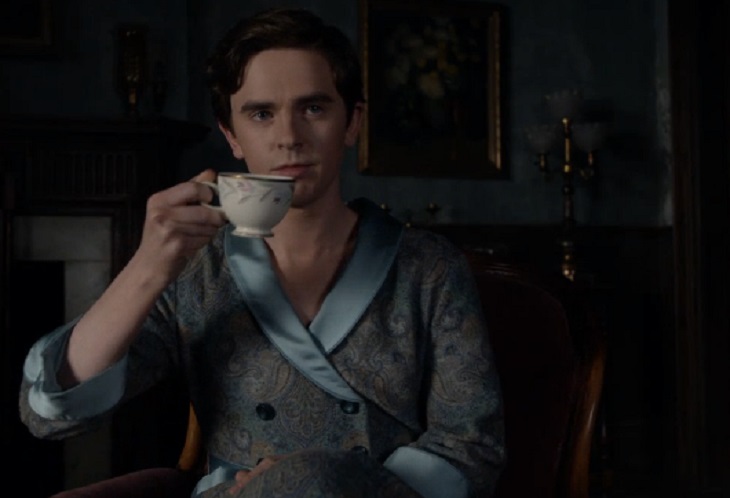 Bates Motel’s fifth and final season has already put viewer’s at the edge of their seat and we have only seen 2 episodes so far.    Monday, March 6, 2017 will air the third episode called ‘Bad Blood’; and the spoilers reveal it is not an episode to be missed!

During dinner, Norma compliments Chick on his cooking; when he doesn’t respond, Norman is a bit confused and asks, “did you not hear her?” as Chick looks at the empty third seat with a full plate of food in front of it.

Bates Motel spoilers show Caleb rushing in and hugging his sister, calling out her name out loud, then watches as her face changes from hers to Norman, whose wearing a dress and wig.

Just as viewers were enjoying the marriage and love between Norma and Sheriff Alex Romero (Nestor Carbonell); it ended all too soon when Norman killed his mother and Alex went to prison.  Sources reveal this is all going to change, as last week we watched Norman taunt Romero during a visit to the prison.

Norma brushes Norman’s face saying, “That’s my boy!”  In the spoilers you can see Romero in the middle of a forest, where he is confronted by Norman, and obviously his  version of his mother.  What will Romero have to say since he is so desperate to prove Norman killed his beloved wife, Norma?

Bates Motel’s upcoming episode shows Norma apologizing that he now knows her secret because it now puts her in a tough spot.  In Norman’s mind, Norma tells him he needs to kill him right away and as she rushes down the stairs and fires a gun; Norman is heard saying, “maybe we don’t have to live like this.”

Who does Norma/Norman fire at?  Don’t miss out on this exciting episode of A&E’s Bates Motel set to air on Monday, March 6, 2017 and be sure to check Soap Opera Spy often for updates, news and spoilers!