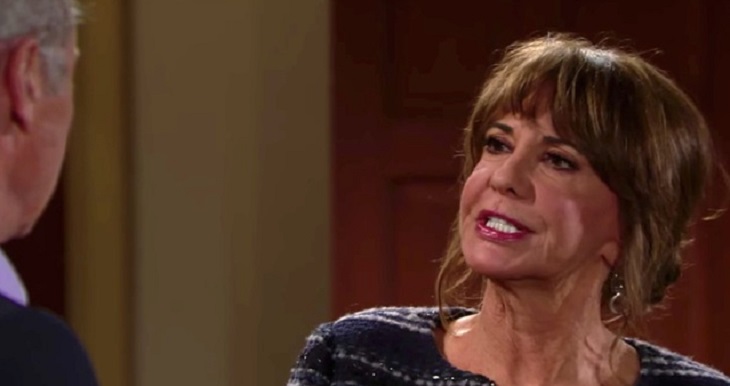 Colin (Tristan Rogers) has always been resourceful on ‘The Young and the Restless’. Just when it seemed like his string had played out, he finds a key, takes it to a lockbox and discovers one of Katherine’s (Jeanne Cooper) valuable pieces of jewelry. But will this seemingly God-sent ring solve his marital problems?

The plot points are as follows: Colin was facing a quick divorce after stealing Jill’s (Jess Walton) money and supposedly investing it.

Oddly, except for soap, Mrs. Atkinson didn’t press her husband for the details of his transaction. Instead, she kicked him out of the mansion and later told him that she was done with him.

Jill’s touching scene in the Chancellor mansion, where she spoke to Katherine’s portrait, seemed to confirm that ‘Jilin’ had ended. But Y&R’s writing staff, along with fans of Walton and Rogers, love this cute couple too much to let it evaporate.

Yes, Colin is a thief, liar and scoundrel. But Jill loves the lout, as he loves her. With that, hope of this pair reigniting their romance never actually died.

Because Colin’s discovery affords him the opportunity to exchange jewelry for cash, it becomes possible that Jill will be able to complete her deal with Jack (Peter Bergman). That recently proposed impulse buy was one that David Sherman (Robert Gant) strongly advised against. However, Jill was determined to become majority shareholder at Fenmore’s in order to get the upper hand over Lauren (Tracey Bregman).

Of course Colin’s business deal, if real could also result in an eventual payoff. But in the meantime it’s likely that he’ll claim pay dirt happened and never mention locating Katherine’s big ring.

Like Colin, Jill schemed her way to money and power. Of course that’s one of the reasons why she still feels a connection with the man she wouldn’t refer to as her better-half. Using Jill’s logic to-date, it will be believable if she manages to overcome her objections to Colin’s recent betrayal.

Jill remains in a weakened state due to her heart attack. That leaves her vulnerable to Colin’s charms. And anticipate the completion of her deal with Jack after Scotty (Daniel Hall) has been rescued, or released.