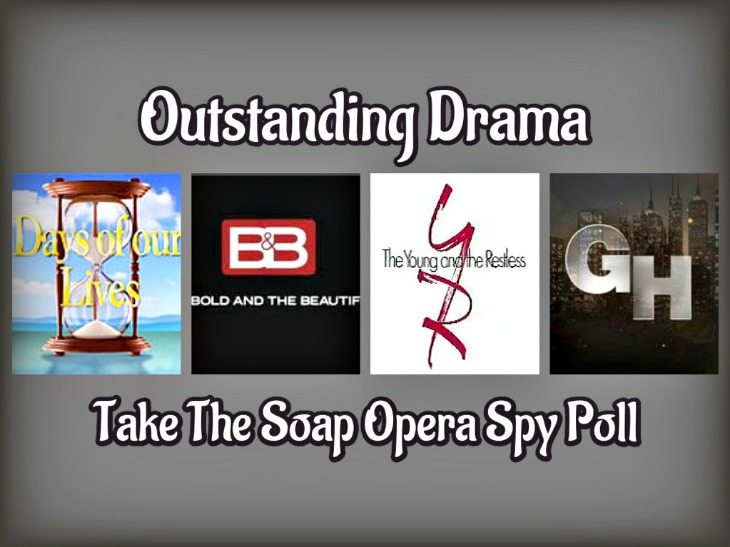 2015 has been a great year for all four daytime soap operas. All shows explored some touching, heartbreaking and emotional storylines. It is definitely a tough choice to make. These shows are packed with daytime’s best actors and actresses enabling powerful scenes that lead to their nomination. But which show do you think deserves to win?

Salem was rocked with several deaths. Having explored a necktie killer storyline, the show was able to deliver some of the most touching material yet. With so many core deaths we watched some of favorites weep and mourn the loss of their loved ones. These numerous deaths had several viewers weeping along with show. Not only deaths but Days had several pivotal moments that could land them, the title of Outstanding drama for 2015.

GH had a few changes to their writing team, nontheless the material was on point. Several couples went through break ups, reuniting, death, sickness and more. The Jason Morgan (Billy Miller) revelation, was one of the high points of the series, and another was Duke’s (Ian Buchanan) death. Several of the actors gave their best performances yet. Do you think GH should win?

THE BOLD & THE BEAUTIFUL

B&B is the show many think will take home the award. We can’t help but agree B&B explored some storylines, never touched in daytime history. Starting off 2015 with Karla Mosley’s (Maya) transgender story. Every scene that revolved around this storyline was perfect. At the end of each episode fans were so intrigued to find out what would happen next. Other pivotal moments includes Caroline’s (Linsey Godfrey) unfaithfulness to Ridge (Thornton Kaye) and all that took place after. B&B had a pretty successful year.

THE YOUNG & THE RESTLESS

Y&R did excellent also. When you talk about Emmy Winners such as Peter Bergman (Jack), Gina Tognoni (Phyllis), Eric Braeden (Victor), who had the lead stories of 2015, you are talking about daytime’s greatest actors. The show did a doppelganger storyline which caused these actors to deliver superb material. Phyllis’ constant disgust with what Victor did to her, Victor not caring, Jack’s anger were all well played. With all the high moments, do you think Y&R is deserving of this award?

Who do you think should win fans? Vote!