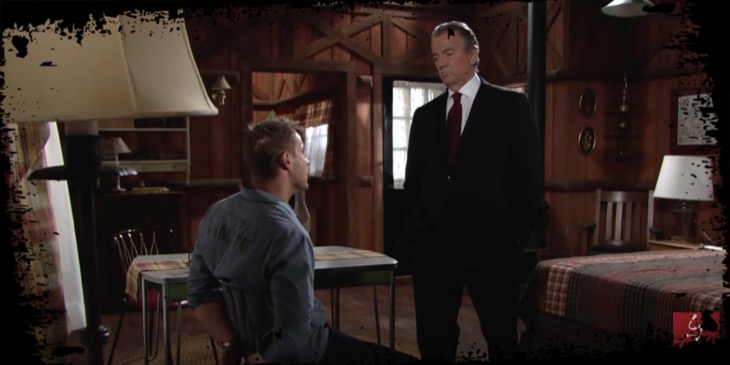 The term epic can be overused, but Victor’s (Eric Braeden) gesture to Adam (Justin Hartley) on ‘The Young and the Restless’ matches that adjective. Speaking with his son in a hide-a-way cabin, Victor first openly admitted that he’d gone too far and destroyed his family. Then, Victor put his hand on Adam’s shoulder. His son returned the feeling by covering his father’s hand with his own. It was a touching scene, especially where these specific characters are concerned.

Yes, the ‘Moustache’ has been vulnerable in the past. However, he generally only expresses the depth of his emotions when Nikki (Melody Thomas Scott) is around. Often times, Victor’s inner feelings are connected to whatever relationship hump ‘Niktor’s’ roller coaster is currently ascending. However, within this current arc, Victor was genuinely remorseful about what happened to Adam on ‘The Young and the Restless’. And, he worked to right the wrongs he committed.

Framing his son for the murder of Constance Bingham (Sally Kellerman) was a proper counterpunch in Victor’s mind, initially. Speaking with Adam in the cottage, Victor noted that he always punched someone back twice as hard as he’d been hit when he was growing up in the orphanage. But, for him to acknowledge that he was wrong and that he’d hurt Adam more than he had been hurt were watershed moments. They also signaled a tipping point within the storyline.

Victor’s noted gestures prove that he did learn from his time inside Walworth prison. Yes, many of his methods have been rightfully questioned and responded to through the years. But, no one can deny that this man values his family above all. Anyone who doubts that declarative statement shouldn’t just ask Adam how he lost his freedom, but also how he regained it, along with access to his wife and child.

‘General Hospital’ Spoilers: When Tyler Christopher Returns, Is There Hope For An Ava And Nikolas Romance?