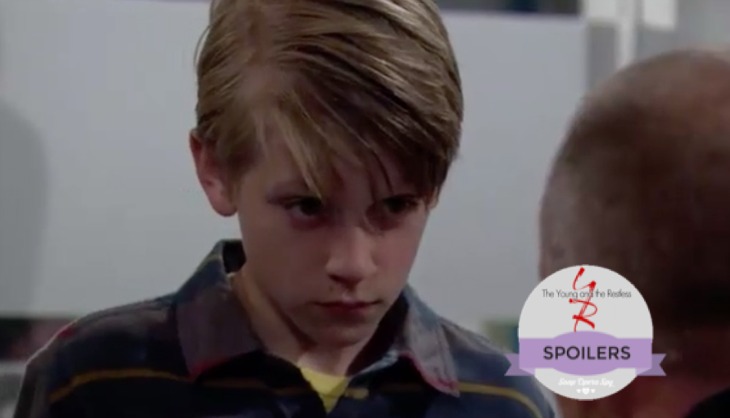 ‘The Young and the Restless’ spoilers for Tuesday, May 10, tease that Jack (Peter Bergman) will be surprised by Phyllis’ (Gina Tognoni) latest outburst. At the park, Phyllis rants about Billy (Jason Thompson) sleeping with Fiona and how it could negatively affect Jabot. Jack is stunned when Phyllis says she slapped Billy. Phyllis suggests that she’s starting to see Billy’s true colors. Jack thinks Billy is about to hit rock bottom and there’s no way to stop him.

Victoria (Amelia Heinle) pays Billy a visit with the kids. When she sees Billy drinking wine with Fiona, she’s outraged. Fiona heads upstairs and Victoria announces that she won’t let her children be subjected to this. They’re leaving. Billy warns that he’ll call the cops. They bicker and Fiona comes back down. She mentions Phyllis’ slap and Victoria is miffed. Fiona exits again and Victoria tells Billy she’s glad to be rid of him.

At Hank’s bar, Travis (Michael Roark) sees that Victoria is troubled again. He assumes it’s about work and urges Victoria to make some changes. Victoria notes that she’s stuck in town due to certain obligations and Travis confesses that he owns the bar. He guesses they’re both stuck.

Travis leads Victoria out on the dance floor and they pull each other close. Nearby, Luca’s (Miles Gaston Villanueva) private investigator snaps their picture. Travis kisses Victoria and she tells him she needs to go. Once she’s alone, Victoria seems pleased. She smiles as she thinks about the romantic moment.

At the athletic club, Fiona gets mad when Jack threatens to call his lawyers. Jack insists that Fiona has a deal with Jabot and she needs to honor it. It doesn’t matter what Brash and Sassy has going on. Fiona shouts that she’s done with both companies. Jack storms out and Fiona turns to Phyllis. She says she didn’t sleep with Billy, but she thinks Phyllis is jealous. Fiona believes Phyllis wants to be the one in Billy’s bed.

Other “Young and the Restless” spoilers say Jack and Billy will get into a major quarrel. At Billy’s place, Jack arrives and scolds his brother for screwing things up. Now both companies have lost out. Billy isn’t worried about it. He won’t apologize for taking what he wants. He intends to do that from now on.

At the lab, Dr. Neville (Michael E. Knight) and Ashley (Eileen Davidson) give Dylan (Steve Burton) the news that Max (Jared Breeze) gave them a confession. Dylan says Max started the fire to destroy the evidence tying him to Abby’s (Melissa Ordway) fall. Dr. Neville speaks privately with Dylan. He urges Dylan to take this seriously. Max has real issues and they need to be addressed.

Meanwhile, Abby and Stitch (Sean Carrigan) talk to Max in the office. Stitch demands the truth from his son. Max admits that he wanted Abby and the baby out of their lives. He wants his dad back. Stitch tries to comfort Max as Dylan walks in. Dylan states that social services is coming to get Max, but Stitch has to stay behind. Stitch wants Dylan make an exception, but he won’t budge.

Stitch, Abby and Ashley all start to cry as Max is dragged away screaming. After Max is handed off, Dylan comes back and tries to console Stitch. Abby chimes in, too. Stitch isn’t interested in their help. Abby turns to Ashley for support. She fears Stitch thinks this is all her fault. Y&R rumors hint that Stitch will really struggle to accept what’s happened. Stick with the CBS soap for updates on this family’s drama.

‘Days of Our Lives’ Spoilers Tuesday May 10: Kayla Stunned as Outbreak Spreads – Aiden Only Wants to Speak with Hope – Steve Gets a Clue About Missing Joey