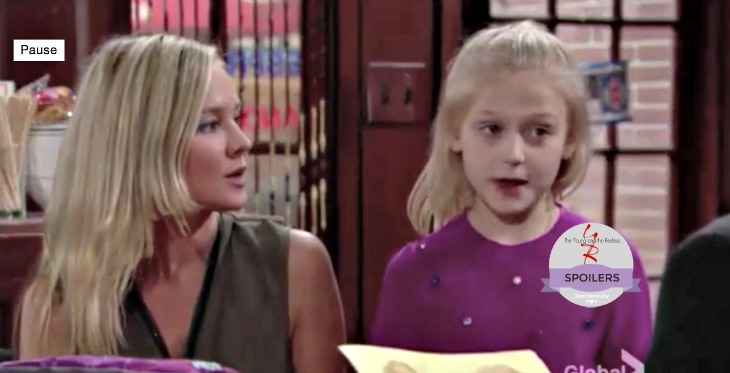 “The Young and the Restless” spoilers for Tuesday, February 2, tease that Nick (Joshua Morrow) will be surprised when he finds out Faith (Alyvia Alyn Lind) has been given updates on Sage (Kelly Sullivan). The preview video shows Faith saying that Sage is sick and she may not be coming home for a while. Nick will ask who told Faith and Sharon (Sharon Case) will reply that she did.

There’s a good chance Nick will be concerned about how this was explained. Faith has already had to deal with a lot due to her mom’s struggles. Nick won’t want Faith to be worried about her stepmom, too. A soap kid’s life is never easy.

Of course, this is a unique situation since Sage isn’t really unstable. Nevertheless, they have to commit to the charade if they want to get Dr. Anderson (Elizabeth Bogush) out of their lives. Y&R rumors hint that Nick and Sage will run into several obstacles as this plot moves further along.

Meanwhile, Colin (Tristan Rogers) and Jill (Jess Walton) will have a heated confrontation. “The Young and the Restless” spoilers say Colin will ask if Jill is ever going to trust him. Jill will snap back that Colin has given her a million reasons not to.

It sounds like Jill is pretty fed up with Colin’s behavior. However, we know that Jill and Colin will have an anniversary party later this week. Perhaps they’ll resolve whatever issues they have by then. Colin and Jill usually find a way to make it work.

Elsewhere, Hilary (Mishael Morgan) will tell Neil (Kristoff St. John) that she didn’t sign the divorce papers. Neil will look slightly hopeful when he hears the news. He’ll ask if that means Hilary is willing to give Devon (Bryton James) a chance.

You must also like —> Who Should Be The Final Lead Actor Nominees For 2016?

It’s clear that Hilary still loves Devon on some level. She just has to dig deep and find that connection. Hilary will soon remember her feelings for Devon and she’ll want to patch things up. Luckily, Devon will be more than willing to give their marriage another shot. Stick with the CBS soap to see their happy reunion.