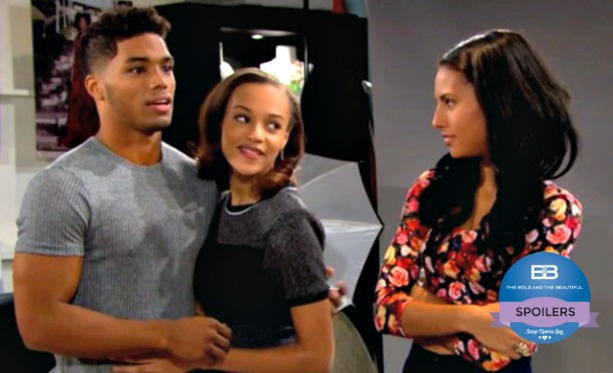 ‘The Bold and The Beautiful’ (B&B) spoilers reveal that Sasha Avant [Felicia Cooper] has had enough of being the secret black sheep of the Avant clan and will make some big moves in coming days. Sasha talks to Julius Avant [Obba Babatunde] once again looking for some compassion.

As usual, Julius has no sympathy for his secret daughter and tells her, once again, to go back to Chicago and leave him and his family alone. Sasha is still reeling that Nicole Avant [Reign Edwards] got Rick Forrester [Jacob Young] to rescind the job offer.

Julius, of course, takes Nicole’s side and Sasha is devastated. She finally realizes she won’t get anything unless she takes it for herself. Sasha sets her sights on being a Forrester model and that means getting close to a Forrester. Zende Forrester [Rome Flynn] is the perfect place to start.

B&B spoilers indicate that Sasha will get a night alone with Zende and will make the most of it. Sasha knows that Zende is frustrated because he and Nicole are not intimate and aren’t likely to get that way anytime soon because she’s carrying Rick’s child.

Zende has been listening to Carter Walton [Lawrence Saint-Victor] tell him that he needs to cut Nicole loose and live his life. With that lecture running through his mind and Sasha there to tempt him, will Zende stray and indulge in a night of passion with Sasha?

While Sasha has bigger aspirations in mind, she doesn’t make a pitch for Zende to make her his girl. Instead, Sasha will offer Zende a no-strings-attached night of intimacy. This is just her first move. Will Zende give in to Sasha’s indecent proposal?

Has he had too much frustration from Nicole? Was Nicole getting Sasha fired which screwed up Zende’s shot at being a photographer too much for him? Of course, Nicole offered up a weak apology about her hormones, but that baby is not his nor his responsibility – and he should not be punished.

If Zende does take Sasha up on her offer, it’s not hard to see why. Of course, the decent thing to do would have been to call it off with Nicole before bedding her BFF, but it might not go down that way. And if Zende does sleep with Sasha, will she let Nicole know?

Is it in Sasha’s best interests to let Nicole know she got her hooks into her man? Or will Sasha get more in the long run by bedding Zende and using that to get back to her goal of modeling at Forrester Creations? Does Sasha want success more than she wants to hurt the Avants?

What do you think B&B fans? Will Zende give in to Sasha’s sultry temptation or stay true to his pregnant sweetie Nicole? Is Sasha justified for going after Nicole’s man since she got her fired before she even got started at Forrester Creations?

Share your thought in the comments below and come back to Soap Opera Spy often for more ‘The Bold and The Beautiful’ spoilers and news.