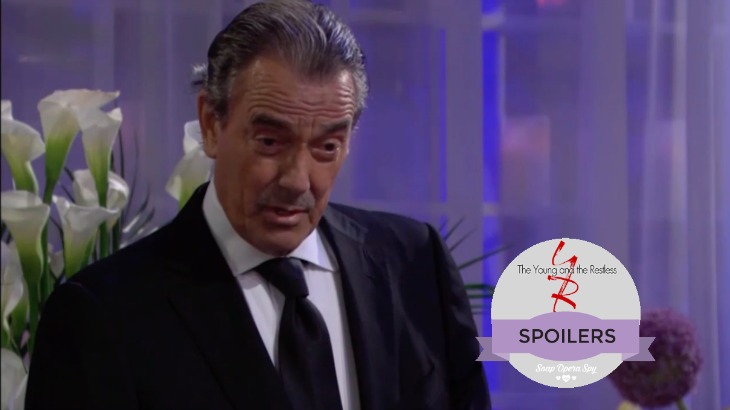 “The Young and the Restless” spoilers for Thursday, September 8, tease that Victor (Eric Braeden) will have a confession to make. At Adam’s (Justin Hartley) memorial, Victor will continue his difficult speech. It’s clear that Victor is struggling to make peace with Adam’s passing.

Y&R’s preview shows Victor stating, “If you all wonder who’s to blame…” Nikki (Melody Thomas Scott) will lean forward in anticipation. She’ll tell Victor not to say anything. Ashley (Eileen Davidson) and Abby (Melissa Ordway) will look curious about what’s about to unfold. Jack (Peter Bergman) will chime in that we can’t control the people we love.

We don’t know how much Victor will divulge, but he’ll likely just indicate that he feels responsible. Victor can’t implicate Chloe (Elizabeth Hendrickson) without implicating himself. There would be questions about their partnership and Victor could end up back in prison.

You Might Also Like —> ‘Y&R’ Kristoff St. John, ‘GH’ Michelle Stafford and Her Daughter Natalia Have Fun Together

Victor feels guilty about Adam’s death, but does he feel guilty enough to turn himself in for the setup? It seems doubtful. Victor loves his family, but he usually protects himself first and foremost. Nikki will step up to make sure everyone understands that Victor would never intentionally kill Adam.

Of course, there’s always a chance that Victor could surprise us. Regardless, Victor probably won’t be returning to the slammer. Let’s hope “The Young and the Restless” will give us a much-needed break from that prison set. Stay tuned to watch Victor cope with the aftermath of his actions.

Elsewhere, Phyllis (Gina Tognoni) and Billy’s (Jason Thompson) kisses will escalate to something steamier. These two have undoubtedly been tempted for quite a while. Now they’re alone at the cabin and things are heating up. Y&R spoilers say Billy and Phyllis will make love on the floor.

Phyllis will soon make an unexpected suggestion. Whatever Phyllis proposes could grab Billy’s interest. Perhaps Phyllis will offer to make Billy her one and only if he agrees to her conditions. That would certainly be music to Billy’s ears, but it might be too good to be true.

Jill (Jess Walton) is still a huge stumbling block for this couple. She’s pushing for Billy to get back together with Victoria (Amelia Heinle). Even if she wasn’t campaigning for the exes, you can bet that Phyllis is not who Jill has in mind for her son.