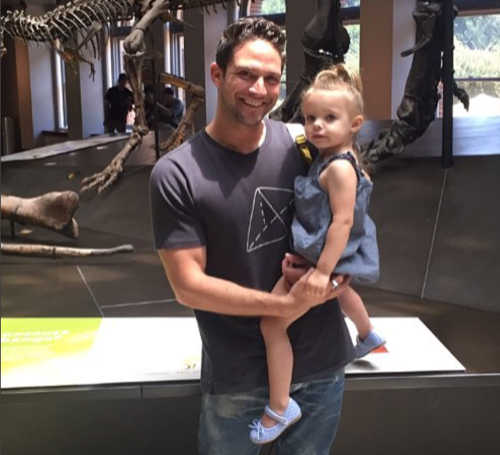 ‘General Hospital’ stars Brandon Barash [Ex-Johnny Zacharra] and Kirsten Storms [Maxie Jones] had the most wonderful time with their two-year-old daughter. In a most recent divorce negotiation, the couple agreed to co-parent their daughter, Harper and they’ve been doing so since the moment they split. Their latest family adventure has proven how good they are being parents as they took Harper to Disneyland.

Kirsten Storms being the happy mom she is took to twitter to share about the fun family moment. Her tweet included an image of Harper and her daddy taking a ride on a canal boat at Disneyland. The picture seemed to have been taken by Storms as Barash can be seen pointing in the direction of the photographer who cannot be seen. Storms captioned the image “Harper said she wanted to go on ‘token rides’ today. So I made a better plan.”

Harper said she wanted to go on"token rides" today. So I made a better plan. 😁 pic.twitter.com/dw2d12jQzZ

Since her birth, Storms and Barash have shared several images of their growing daughter, Harper. These images can be found on both parents’ social media accounts. Currently, Barash is off the ‘General Hospital’ canvas but no doubt he will stop by very soon. Since his departure, he has made several visits to the fictional town of Port Charles to reprise the role of Johnny Zacharra.

His ex-wife, Storms, on the other hand remains as a contract player for the ABC drama. Playing the role of Maxie Jones has brought Storms to heights of fame. Storms can be seen weekdays on GH as she plans to wed the love of her life, Detective Nathan West [Ryan Peavey]. Will they make it down the aisle without any hindrances?

Fans can always check back to Soap Opera Spy for more updates on their favorite daytime stars and soap operas.

Disneyland yesterday was beyond crowded. But churros and a smiling two year old made the hour long wait to get a parking spot seem like a breeze. Harper QOTD – "I went on a boat into a Whales mouth!!" #classic