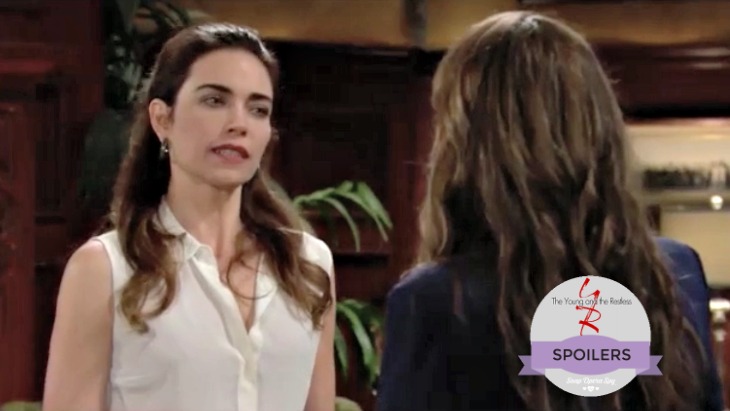 “The Young and the Restless” spoilers for Friday, August 5, tease that Victoria (Amelia Heinle) will have a brief meeting with Jill (Jess Walton). She’ll insist that Jill doesn’t even need to sit down. It seems Victoria’s news won’t take long. Cane (Daniel Goddard) will listen to their conversation nearby.

Y&R spoilers indicate that Billy (Jason Thompson) will soon approach Victoria about coming back to Brash and Sassy. He’ll suggest that Jill’s right about Victoria being needed at the company. Maybe that means Victoria will turn down Jill’s offer and Billy will be forced to get involved.

That could actually help Jill’s plan to reunite Billy and Victoria. Once Billy expresses interest in working with his ex, it will naturally bring them closer. Y&R rumors hint that these two may start to bond again in the near future.

You Might Also Like —> Summer NOT Pregnancy, Luca Pops the Question – Hilary Argues with Ashley – Billy Fights With Cane

Meanwhile, Abby (Melissa Ordway) will be surprised by something she discovers about Stitch (Sean Carrigan). Later, she’ll open up to Ashley (Eileen Davidson) about what she’s learned. Abby won’t think that Stitch trusts her. He’s apparently keeping secrets and that definitely isn’t good for their relationship.

Ashley will offer helpful advice, but Abby will remain concerned. Of course, confronting Stitch may be the only way to sort everything out. Stitch and Abby will need to focus on honesty if they expect to move forward as a couple. They’ve overcome a lot of obstacles over the last few months, but this one may be tough to get past.

Other “Young and the Restless” spoilers reveal that Lily (Christel Khalil) will drop a bomb on Hilary (Mishael Morgan). At the current meeting, Lily will make a motion to remove Hilary from the board of the foundation. If the motion passes, it will be effective immediately.

Jack (Peter Bergman) will find himself in a bit of a bind. The foundation is missing out on donations thanks to the bad press from the drug trial lawsuit. Kicking Hilary off the board might be the best move they could make. However, Jack will undoubtedly feel guilty about it. He grew somewhat close to Hilary during her relapse and he’ll hate to toss her out.

You can bet that Lily and Ashley will do everything they can to make sure Hilary gets the boot. Will they get the votes they need to push this through? Stick with the CBS soap for updates on the board’s decision.

‘The Bold and the Beautiful’ Spoilers: Quinn Pleads Her Case, Eric Must Make a Choice – Ridge and Thomas Aim for Fresh Start