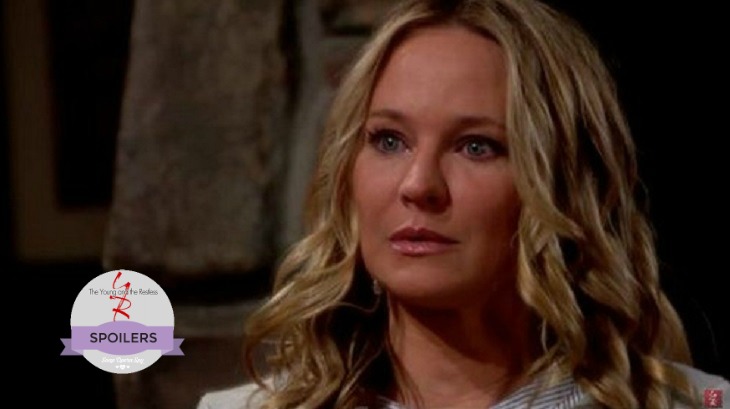 Most, if not all, Sharon (Sharon Case) fans don’t like the corner their favorite character on ‘The Young and the Restless’ has been written into, again. Yet, there she is, standing in familiar territory. Now, as the inevitable Christian reveal gets set to be exposed, the cottage walls are surely closing in on Case’s character.

It wasn’t Sharon’s fault that she took Sully home. Dr. Sandra Anderson (Elizabeth Bogush) concocted a revenge scheme that saw Nick’s (Joshua Morrow) and Sage’s (Kelly Sullivan) baby kidnapped and given to Sharon, while she was placed in chemically altered mental state at Fairview’s mental health facility. So, at first, Sharon had done nothing wrong and she and Dylan (Steve Burton) were overjoyed with their first-born child.

During that time Patty (Stacy Haiduk) was doing all that she could to expose the bad doctor’s ploy. Then, last winter, after getting Sandy to admit all that she had done, Patty murdered her with a letter opener in self-defense. So, instead of serving time in prison for numerous crimes, Dr. Anderson was likely transferred to a smokey facility where she’s practicing eternally.

However, after that drama passed, flashbacks convinced Sharon to have a DNA test conducted. She took an unauthorized DNA sample from Nick and resultingly learned that Sully was actually his son, Christian. Of course, Sharon was unknowingly in the dark about the real meaning of that paternity test, because Nick’s blood brother, Adam (Justin Hartley), is actually the father of Sage’s son.

The past regime at ‘The Young and the Restless’ decided that Sharon would keep the apparent paternity information hidden and manipulate Mariah (Camryn Grimes) into being her muted confidant. Sharon’s sustained choice can’t be blamed on veering away from her pharmaceutical schedule. Instead, it can only be explained by this character not learning from her many past experiences and therefore possessing some type of inherent personality flaw.

Devotees of ‘The Young and the Restless’ and Case are hoping that new executive producer Mal Young has ordered Sharon’s storyline to be quickly resolved. It would also be nice if little, or no, damage is done to this character’s reputation as well. Continuing to stymie Sharon’s growth wouldn’t fit the experiences she’s had, or enable this solid actor to develop the character in a different direction. But, a 180 degree turn would allow one of the show’s more beloved and enduring figures to project strength moving forward.