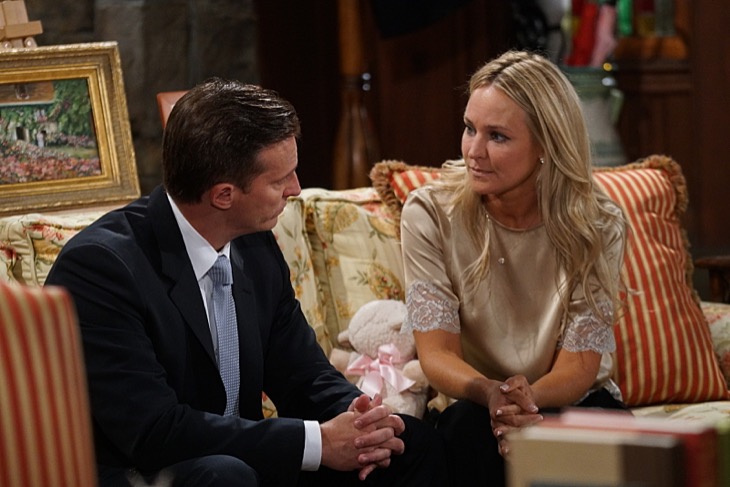 Sharon’s (Sharon Case) heart is in the right place on ‘The Young and the Restless’. She’s quickly turned from an emotional wreck to a respectable force. Cautiously optimistic Sharon fans are hoping that the positive steps this character has made will be furthered in 2017.

Fan, or foe, all reasonable minds must admit that Sharon’s offer to divorce Dylan (Steve Burton) was completely selfless. It’s been years since Sharon has been portrayed as a multidimensional human being. And now Y&R’s new writing team must further this restoration of one of the great characters on this show.

It might not be totally fair to offer this opinion, but the Sully-is-Christian (Jamie and Alister Tobias) arc looks trite in retrospect. It’s very easy for someone who isn’t a soap opera writer to critique the efforts of everyone who created and wrote this storyline. This scribe would go so far as to say that the arc was interesting at it’s origin, especially considering how Sandy (Elizabeth Bogush) was written into the story and how Patty’s (played by the great Stacy Haiduk) reappearance was key to the big reveal. But it’s also fair to note that the stretched resolution should have come shortly after Sharon learned the truth.

Clearly, the desire to project Sharon as a hero is key to a belief that she should have told Sage (Kelly Sullivan), Nick (Joshua Morrow) and Dylan the truth as soon as she knew it. Nevertheless, the aftermath of the reveal is helping to projecting Sharon’s strengths.

Because Burton’s exit from the cast will be seen on screen early in the new year, it’s possible that Sharon will be standing alone inside the cottage very soon. With many aspects of this character’s life having been dramatically altered there is also vast opportunity for her to grow.

Related: Jack Leaving Jabot – Running To The Foundation Or Away From Phyllis?

Case is a terrific actor who has always demonstrated solid range. Here’s hoping that head writer Sally Sussman and her team, as led by executive producer Mal Young, allow Sharon to stand tall in Genoa City once again.