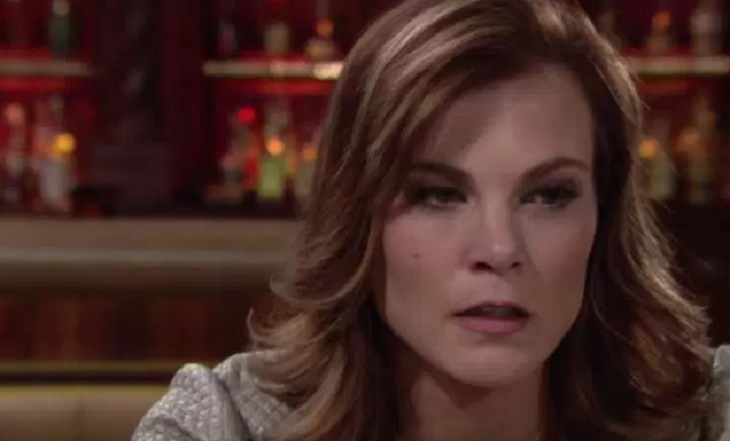 Phyllis (Gina Tognoni) has long been known by the nickname ‘Red’ on ‘The Young and the Restless’. The former Mrs. Abbott’s decision to change her hair color to dirty blonde, or some variation of that type based upon viewer perception, represents an ongoing transformation. Whether Phyllis’ connection to Jack (Peter Bergman) is only fractured and not permanently broken remains to be seen.

Jack’s idea to take over Fenmore’s is being conducted independently of Phyllis’ consideration of her own career. She’s recently come to the realization that her painstaking efforts to restore a relationship with the love of her life haven’t worked. Time and persistence didn’t matter.

A kiss she received from Jack in the lobby of the Genoa City Athletic Club felt like a sendoff because it was. Phyllis was wished the best in her life moving forward.

And, she knew that Jack was sincere in not wanting to reestablish ties.

If Jabot does take Lauren’s (Tracey Bregman) company under its corporate umbrella, an unexpected employee would likely come with that deal. Y&R’s writers obviously appear to have created a plot line whereby Lauren needs Phyllis’ technology skills and therefore will offer her some type of employment.

It’s easy to see a scenario unfold whereby Phyllis resigns from Jabot and is hired by Fenmore’s, unbeknownst to Jack. Jabot will either complete a hostile takeover, or obtain that company through an alternative acquisition. Viewers can then visualize an upcoming scene where Fenmore’s offices are relocated to the space that Brash and Sassy occupied. And yes, Jack will unexpectedly find Phyllis in his building again.

Related: With The Change In Y&R Writers – Many Characters Will Be Headed In Different Directions

Phyllis admitted she had completely betrayed Jack, but grew tired of his insults after awhile. Even though she still loves him, Miss Summers (if she reclaims that moniker) would be wise to pursue other life options in 2017. Yes, it’s possible that ‘Phack’ could always rise again. But if it doesn’t, than a reformed ‘Red’ will find a way to survive because she always has.