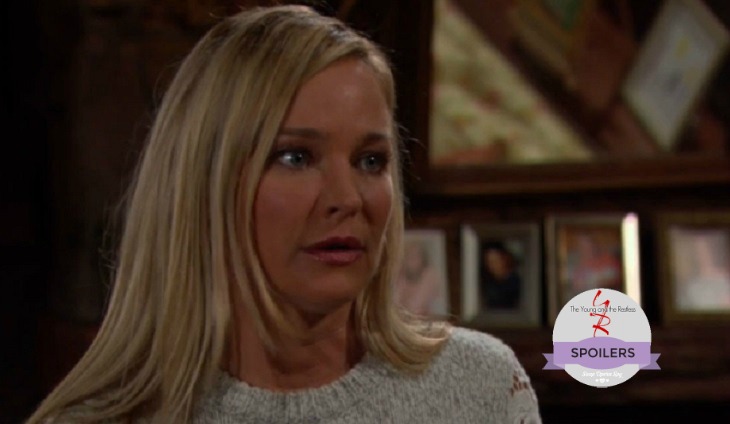 Patty (Stacy Haiduk) possesses dangerous information on ‘The Young and the Restless’. Sharon (Sharon Case) convinced herself that Patty’s knowledge had been contained inside a mental health facility. But, recent phone calls to the cottage have now been confirmed as coming from the room where Ms. Kitty’s owner lives. And, of course, this means that the long-awaited Christian reveal has restarted.

Flashing back in soap time: Sage (Kelly Sullivan) was going to tell the world that Sharon was trying to pass off Christian as Sully. After confirming that point, Sage confronted Nick’s (Joshua Morrow) ex-wife and told her that she knew Christian never died. Sharon was shocked by Sage’s revelation and followed her car from the cottage along a fated road earlier this year.

The subsequent car accident that took Sage’s life wasn’t Sharon’s fault. Instead it was simply caused by driver distraction. Thrown from her vehicle and barely alive on the side of the road, Sage then told Sharon that she had to tell Nick that Christian was still alive. Of course, Sharon never has.

Meanwhile, Patty has been living in a confined facility. Due to an existing medical condition the authorities didn’t put her in a traditional jail after she murdered Dr. Sandy Anderson (Elizabeth Bogush). That act was taken in self-defense as Ms. Malpractice was attempting to silence her patient. But, Patty plunged a letter opener into Sandy’s back instead.

Patty’s discovery of Sandy’s baby-swap crime put her life at risk. But, Haiduk’s character managed to survive once again. However, she wasn’t able to relay what she knew about Christian to anyone at that time, which makes her current phone calls to Sharon’s home intriguing.

Patty might be playing games with Sharon for some unknown reason, or she simply wants Sharon to admit the truth so she can be moved to a less restrictive environment. With whatever plays out there’s little doubt that Haiduk’s return means that this extended storyline is advancing toward a dramatic climax.