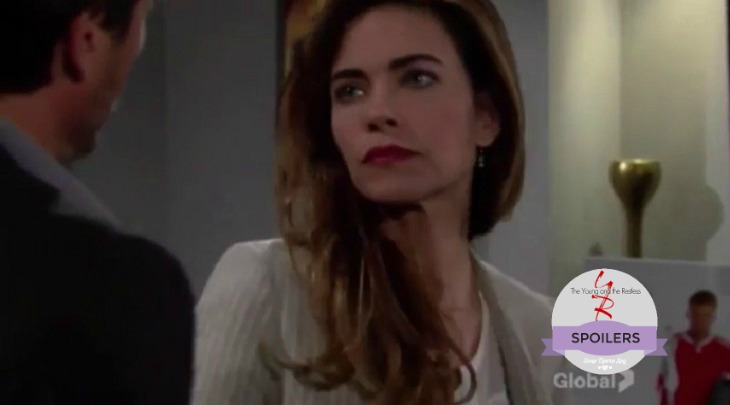 “The Young and the Restless” spoilers for Monday, August 15, tease that Chloe (Elizabeth Hendrickson) will wonder if she’s doing the right thing by handing over the journal entries. At Newman Enterprises, Victor (Eric Braeden) insists that Adam (Justin Hartley) has suffered enough. Chloe and Victor argue about which one of them is playing God. Victor says Chloe needs to focus on her daughter and enjoy her life.

Meanwhile, Adam dreams Victor is a guard in prison. They have a heated confrontation about fate and happiness. At the penthouse, Chelsea (Melissa Claire Egan) has a dream about Adam. She remembers all of the trouble Victor has brought to their lives.

Chelsea awakens and begins sobbing as Chloe walks in. When Chloe pushes her to open up, Chelsea admits that she’s struggling. She’s furious with Victor for the pain he’s caused. Chelsea isn’t sure she can give Connor (Gunner and Ryder Gadbois) the life he deserves.

Chloe breaks down in tears and confesses that she hasn’t been entirely honest about her anger. There’s a small piece of her that hasn’t let go. Chloe now sees that others are suffering, too. Y&R rumors hint that guilt could continue to build for Chloe.

Elsewhere, Nikki (Melody Thomas Scott) chats with Victoria (Amelia Heinle) about leaving Newman Enterprises. Victoria feels good about her decision, but wishes Victor had tried harder to get her to stay. Nikki assures Victoria of her father’s love. She encourages Victoria to live like Victor. Nikki thinks Victoria should make her own decisions and never have any regrets.

Other “Young and the Restless” spoilers reveal that Nick (Joshua Morrow) will tell Phyllis (Gina Tognoni) about a surprising discovery. At Jabot, Nick says Luca (Miles Gaston Villanueva) placed the blame on Travis (Michael Roark) too quickly. There’s a debate about Phyllis’ involvement in Victor’s plan. She states that Jack (Peter Bergman) is out of the loop.

Nick agrees that they need to work fast to bring down Luca. Across town, Luca and Summer (Hunter King) have sex before discussing wedding plans. Luca thinks Top of the Tower would be a good location for the ceremony as well as the reception. Summer feels like Luca might be keeping secrets or testing her in some way.

Luca says he’s testing Summer’s family. He doesn’t think they really approve of their upcoming marriage. Summer thinks they’ll get on board eventually. If Victor allows them to use Top of the Tower, Luca will view it as a sign of acceptance. Summer’s OK with getting married there. They decide to tie the knot next Friday.

Later, Luca calls Travis to pass along some info. Travis isn’t interested in what he has to say, but Luca urges him to listen. He claims Victor wants to pin the oil crisis on Travis. The news is shocking, but Travis isn’t bothered. He thinks Victoria will have his back on this. Luca suggests Travis shouldn’t be so sure about that. He lies that Victoria and Billy (Jason Thompson) have reunited.

In Victor’s office, Phyllis and Nick say Luca fabricated evidence that points to Travis. Victor intends on taking care of it. He wants Travis to return and prove his innocence. Victor manages to get Travis’ phone number, but Nick thinks there’s probably only one person who can make him come back to Genoa City.

After Nick exits, Phyllis and Victor rehash their plan to keep Summer away from Luca. Victor maintains that this wedding isn’t happening. When Summer arrives, she’s curious about what they’re up to. Summer questions if they’re scheming to stop her marriage.

Related: Chrishell Stause Returns To ‘Y&R’ As Bethany – Will She Expose Phyllis’ Affair?

At the Brash and Sassy office, Nick pleads for Victoria’s help. He wants her to call Travis and convince him to return. Victoria doesn’t believe Travis will listen to her. Nick thinks she can talk him into it, but Victoria insists she can’t do it.

It sounds like Victoria is going to drag her feet on this, but she’ll likely come around on the idea. We’ll give you updates as more details emerge on this intriguing storyline. Stick with the CBS soap to see what lies ahead.

‘The Young And The Restless’ News: Alum Shemar Moore Wins Court Case Against Former ‘Criminal Minds’ Star Who Stole $60,000 From Him