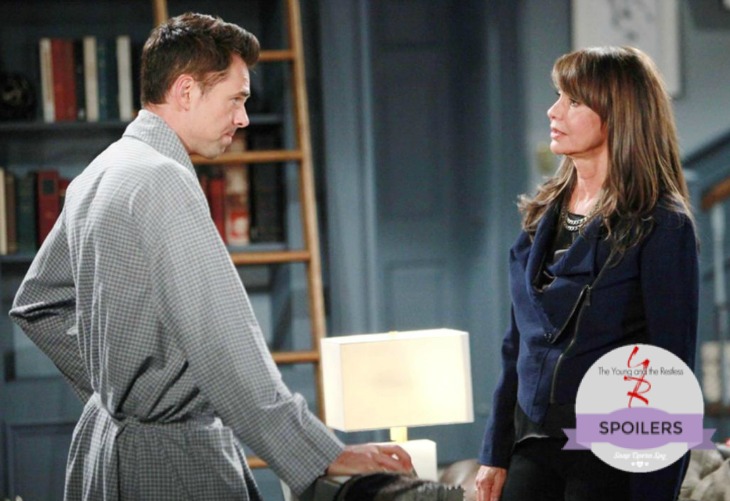 ‘The Young and the Restless’ spoilers reveal that Jill Abbott [Jess Walton] is headed back to Genoa City and plans to grab Brash & Sassy right out from underneath Billy Abbott’s [Jason Thompson] nose! Jill will return to town on Monday, July 11.

In an interview with TVInsider Jess revealed what ‘Y&R’ viewers should expect when Jill returns to town. Billy’s mother is furious with him for screwing up yet again. After stealing Brash & Sassy away from Victoria Newman [Amelia Heinle] Billy has done nothing but neglect the company.

Jill has been in Chicago and her spies in Genoa City have let her know that the cosmetic company is going under. What is Jill’s plan? The first thing she wants to do is bring Billy’s competitive edge by putting Cane Ashby [Daniel Goddard] in his path. Jill also thinks if she gets hold of Brash & Sassy she can make Billy and Victoria work together. And then let nature take its course.

Does Jill believe that Billy and Victoria are meant to be and all they need is a little help? “Victoria would come back to Billy in a heartbeat. And you know what? I think it’s true,” Jess Walton revealed.

But what Jill doesn’t know is that Victoria is hot and heavy with Travis Crawford [Michael Roark} and is falling in love with the bartender. Of course Jill also has no idea that Billy is having an affair with Phyllis Abbott [Gina Tognoni]. Mama Abbott will have plenty to say on that subject, but Jill need to be careful! Billy just might remind his mother that many moons ago she had an affair with Jack Abbott [Peter Bergman] while married to John Abbott [Jerry Douglas].

‘The Young and the Restless’ fans are you about Jess Walton’s return to Genoa City? Don’t forget to tune in on July 11 – that’s when Jill will be back and ready to take on Billy, Victoria and Brash & Sassy!

‘The Young and The Restless’ Spoilers: Nikki Fights For Her Man – Wants Victor Released From Prison