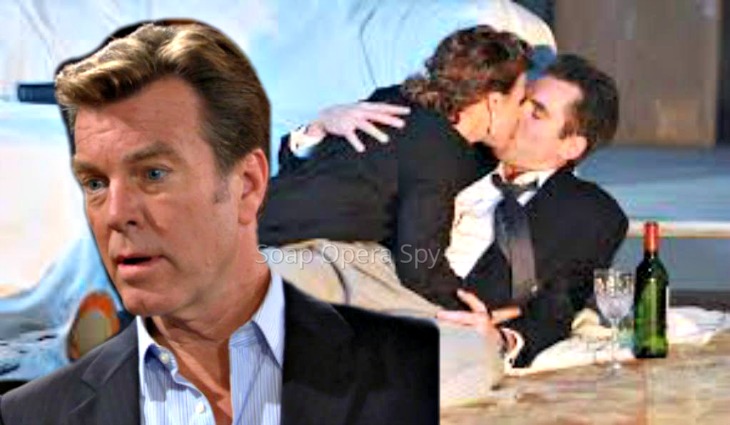 ‘The Young and The Restless’ (Y&R) spoilers reveal things are heating up between Phyllis Abbott [Gina Tognoni] and Billy Abbott [Jason Thompson] and are about to fall apart between Billy and his brother Jack Abbott [Peter Bergman].

Jack will work out a Passkey settlement with Victoria Newman [Amelia Heinle] since Summer Newman [Hunter King] confessed her perjury and Victoria has Jabot over a barrel. Part of the deal is to punish Billy for his dishonesty.

Jack has to fire Billy and when he shows up to Billy’s house to break the news, he’s shocked by what he sees. Jack will find Billy and Phyllis filthy (literally) and in a state of undress. The explanation is fairly innocent, but the fallout is bad.

When Phyllis showed up to see Billy, she was blue so he took her out for a ride on his motorcycle. We wonder when Billy got a bike – perhaps it came along with the Chancellor Mansion… They go out for a ride to get their minds off the deposition stress.

As a result, they get muddy and come back to clean up and apparently that involves shedding clothes in front of one another. Jack will walk in on the duo looking way too cozy and in far too little clothing and does NOT like what he sees.

Jack drops the firing bomb on Billy and Billy kicks him out of his house. Phyllis will chase her husband out but Billy asks her to stay. Who will Phyllis choose? Even if she goes with Jack now, Y&R spoilers reveal that in coming days, her marriage is at a crossroads.

Billy may begin to aggressively pursue Phyllis to punish his brother. Y&R spoilers also reveal that Billy is furious that Victoria and Jack cut him out of the Passkey profits. Jabot and Newman will split Passkey sales 50/50 and everyone will profit except for Billy.

This is too much for him. Will Billy take the energy he once devoted to hating Victor Newman [Eric Braeden] and turn it on his brother? Looks like the Abbott men will be pitted against each other in coming weeks and Billy stealing Phyllis would be a perfect revenge.

What do you think Y&R fans? Will Phyllis give into temptation with Billy or should she stay with Jack? Is Billy right to be angry about being cut out of Passkey? Share your comments below and come back to Soap Opera Spy often for day ahead ‘The Young and The Restless’ spoilers plus interviews and more.