‘The Young And The Restless’ Spoilers: Adam Newman Arrested For Murder – Did Victor Set Son Up? 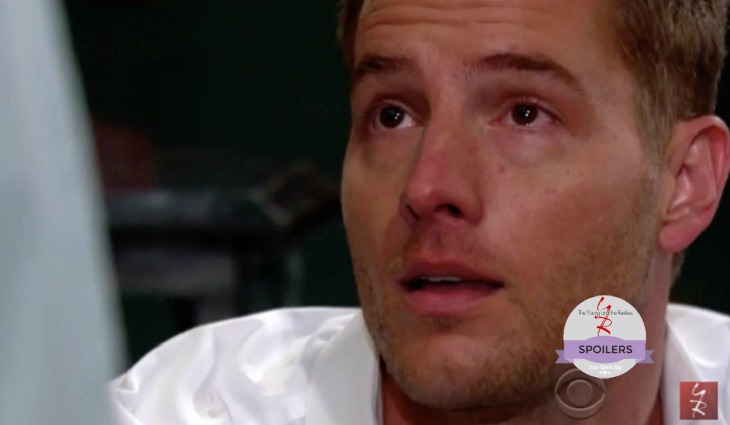 ‘The Young and The Restless’ (Y&R) spoilers tease that Victor Newman [Eric Braeden] may be taking revenge against his estranged children to a whole new level. Adam Newman [Justin Hartley] will soon be arrested for murder – but did Adam do it or is this Victor playing games from behind bars?

Adam may have pushed the wrong buttons with his father when he told Victor he would personally make sure he served out his entire decade-long sentence and then went to Judge Gates [David Wright] to make sure he knew that Victor was manipulating Meredith Gates [Alicia Coppola].

Was Adam feeling so cocky that he overstepped and enraged Victor into this murder set-up? It’s Sage Newman’s [Kelly Sullivan] journal that implicates Adam, but that seems unlikely. After all, Sage just left Adam a heartfelt letter thanking him for keeping the Christian paternity secret.

Of course, having that letter from Sage in hand might help exonerate Adam and prove the diary is a forgery but Adam and Chelsea Newman [Melissa C Egan] burned it. Plus, this is the perfect way for Victor to set Adam up – it’s karmic retribution in a way.

Remember when Adam conspired with Jack Abbott [Peter Bergman] to frame Victor for murder by forging a diary that was purported to be Victor’s? Of course, that failed scheme landed Adam in jail but Victor then got him out and under his thumb once again.

Is Victor now pulling the reverse scheme on Adam? Victor did promise to make all of his children pay for helping send him to jail. With Victor behind bars, Adam wonders if his old man had help and will confront Luca Santori [Miles Gaston Villanueva] and ask if he helped forge the diary.

Luca denies any involvement but seems sketchy which has Adam suspicious. Adam hopes that Dylan McAvoy [Steve Burton] exhuming Constance’s body will prove his innocence but, instead, Dylan arrests Adam.

Did the examination of her body show foul play? If so, could it be Victor that killed her? The fall that contributed to Constance Bingham’s [Sally Kellerman] death happened while Adam and Sage were away. But could someone else, perhaps Victor, have finished the old lady off?

After all, Constance did have dirt on Victor and a lot of hatred for him. Victor took over Gabriel Bingham’s father’s company led to his suicide. And on her deathbed, Constance asked “Gabriel” (who was really Adam) to avenge his father’s death.

What do you think Y&R fans? Would Victor stoop so low as to fake evidence that could put Adam behind bars for life? Share your comments below and check back with Soap Opera Spy for more ‘The Young and The Restless’ spoilers and news.

‘Days Of Our Lives’ Poll: Will Aiden Get Back His Old Life With Hope And Chase? VOTE!