‘The Young and the Restless’ Poll: Vote for Your Favorite Y&R Performer Week Of March 28-April 1 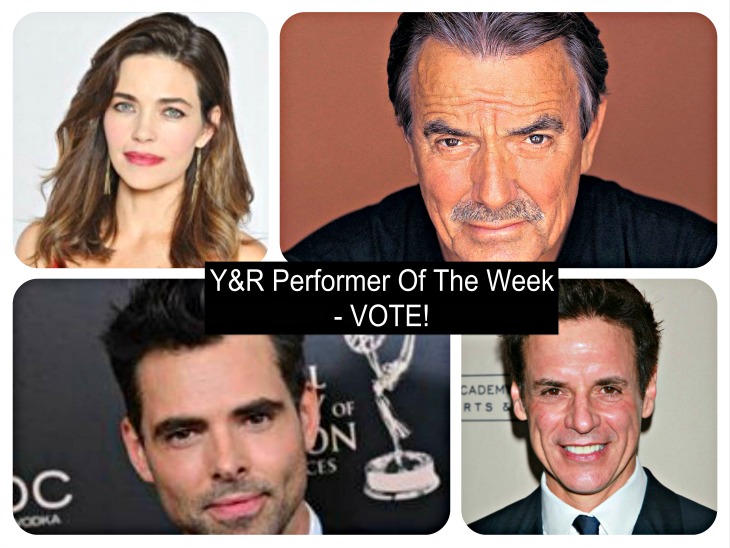 “The Young and the Restless” viewers were given plenty of action this week. Naturally, there were some great performances in the midst of the chaos. We picked four of our favorites and now it’s your chance to select the one you liked best. Check out the options and cast your vote.

Victor’s verdict dropped this week and it came down hard. How the mighty have fallen! This storyline has certainly created some low points for several characters. Victor obviously got the worst of it. Luckily, it’s given Eric Braeden a chance to break out of Victor’s office.

We enjoyed his reaction to the verdict as well as the strained conversations between Victor and his family. It’s also been fun to see Victor head to the slammer. Braeden is a Y&R staple and we look forward to even more of his work.

Amelia Heinle really brought it this week as Victoria accepted Victor’s fate along with his frostiness. In addition, there were some intense confrontations between Victoria and Billy (Jason Thompson). Those two have always have solid chemistry, even when they’re at each other’s throats.

Victoria is going through a lot right now and Heinle is letting us feel her pain. However, Heinle still delivers those moments of fierce determination. Victoria will get through this and we’re anxious to watch Heinle show us how.

We have to recognize Jason Thompson for his portrayal of Billy this week as well. Thompson has been an asset to “The Young and the Restless” from day one. We love Thompson’s ability to go from gentle to outraged so effortlessly.

Plus, Thompson apparently has chemistry with everyone. “Villy” still reigns supreme, but whatever’s going on with Phyllis isn’t too shabby either. Thompson has been helping us see that Billy is drawn to Phyllis, but longs for his ex. Bottom line, any episode Billy’s in is a good one.

Michael kind of dropped off the map for a while, but we’re glad he’s being featured more often. Christian LeBlanc’s scenes were incredibly heartfelt this week. As Michael faced the possibility of disbarment, LeBlanc showed us his character’s attempt to mask the pain.

Once Lauren (Tracey E. Bregman) got Michael to open up, he admitted how lost he was feeling. It was heartbreaking to watch Michael struggle, but we were impressed with LeBlanc’s powerful performance. Stay tuned to see how Michael copes with the aftermath of his actions.