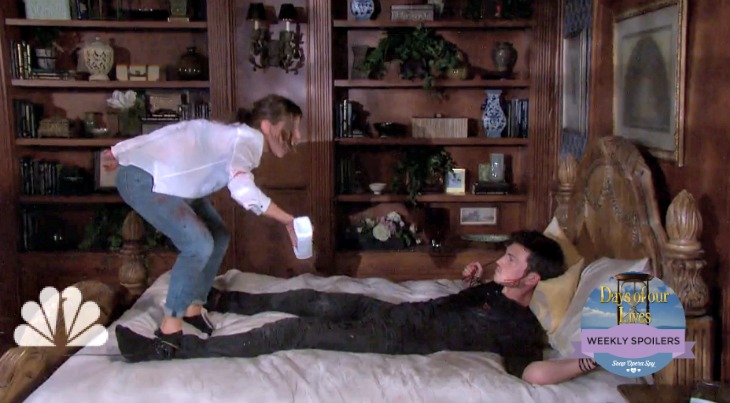 “Days of Our Lives” spoilers for April 4-8 tease that it’s going to be an explosive week on the NBC soap. Abigail (Kate Mansi) has been on edge ever since Ben (Robert Scott Wilson) escaped from the psychiatric hospital. In fact, Abigail is starting to think she belongs in one as well.

Chad (Billy Flynn) and JJ (Casey Moss) have convinced Abby that she’s been imagining all of these encounters with Ben. They’re worried about Abigail’s mental state. However, Abigail will soon find herself looking in Ben’s cold eyes and she’ll realize that this is no hallucination. In the latest issue of Soap Opera Digest, Robert Scott Wilson confirmed that Ben will appear in the flesh.

Once Abigail determines that she’s not going insane, she’ll actually feel a lot better about the situation. Abigail has essentially had several trial runs of this showdown. She’s already faced her fears. “Days of Our Lives” spoilers indicate that Abigail will ask Ben what he wants. He’ll reply that they should be together. Abby will try to use Ben’s desire to her advantage. She’ll seduce Ben in an effort to gain the upper hand.

Ben will fall for Abigail’s tactics and they’ll end up making out on the bed. Suddenly, Abigail will grab a sharp object and lunge it toward Ben. He’ll scream as blood gushes out of the stab wound. Abigail will manage to tie Ben to the bed posts and that’s when this revenge plot will be taken to another level.

DOOL’s weekly preview video shows Abigail angrily dousing the mattress with gasoline. She’ll pull out a box of matches and Ben will figure out what Abby has in mind. Ben will insist that Abigail won’t do it. With a bloody hand, Abigail will strike a match and gaze at the man she hates. It’s clear that Abigail has been pushed to her limit.

We watched a similar scenario play out when Hope (Kristian Alfonso) shot Stefano (Joseph Mascolo). “Days” viewers know how that turned out. In the heat of the moment, Abigail will drop that match.

Nevertheless, it seems Ben will either break free or someone will arrive to save him. He’ll be rushed to the hospital where his burns will be treated. DOOL rumors hint that Ben’s condition will be critical. Stick with “Days of Our Lives” for updates on Ben’s fate.

So “Days” fans, what do you think about the news that Abigail will set Ben on fire? What will Abigail do when she discovers that Ben survived? Voice your opinion in the comments below and don’t forget to check Soap Opera Spy often for the latest “Days of Our Lives” spoilers, rumors, updates and news.

‘The Young and the Restless’ Poll: Vote for Your Favorite Y&R Performer Week Of March 28-April 1